Oh-Em-Gee. That was both easier and significantly more difficult than I thought it was going to be. And the final product? Lordy, he’s cute.

To start with on Tuesday morning I made my own buttercream icing but since I’m never going to do that again you get no pictures. Okay, here, you can have one. 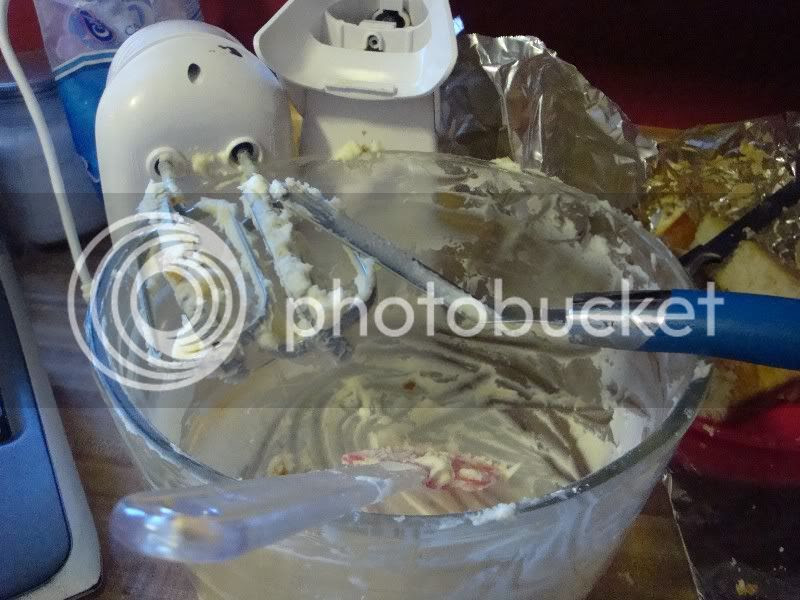 This was way more trouble than it’s worth as I used two sticks of butter, a pound of powdered sugar, half and half, and a lot of time to get half the amount you can buy from Betty Crocker for a buck fifty. I’m all for homemade, but seriously, where’s the sense in expending a lot more effort, time and money to get half the product? None, that’s what I say.

The shaping of the Tauren-Cat was actually pretty easy. Even though you can’t see it, the bottom layer actually came out of the pan in about three pieces. But it’s the bottom layer so plbbt! Who’s going to know?

Here’s what Tauren-Cat looked like all shaped up. Notice the clever use of cupcakes to fill in at his neck and to make his tail. Go ahead, notice. 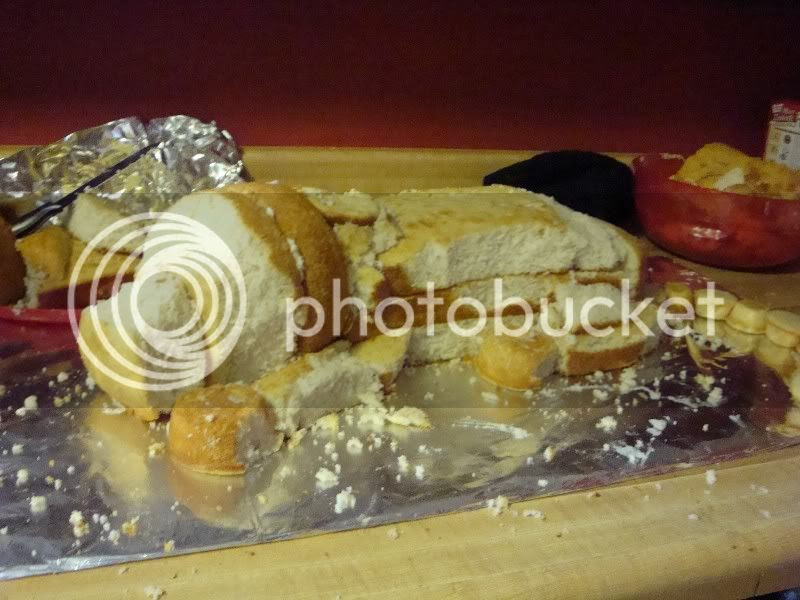 Dear Lord, isn’t he cute? That round little nose is going to be my undoing. When we start eating him, I’m going for the snout.

I had to protect him overnight on Tuesday since I wasn’t going to put on the fondant until Wednesday (today?). There was nothing for the cling film to stick to so I held it down with virtually my entire spice collection. If you ever wondered what my spice cabinet had in it, here’s your chance. 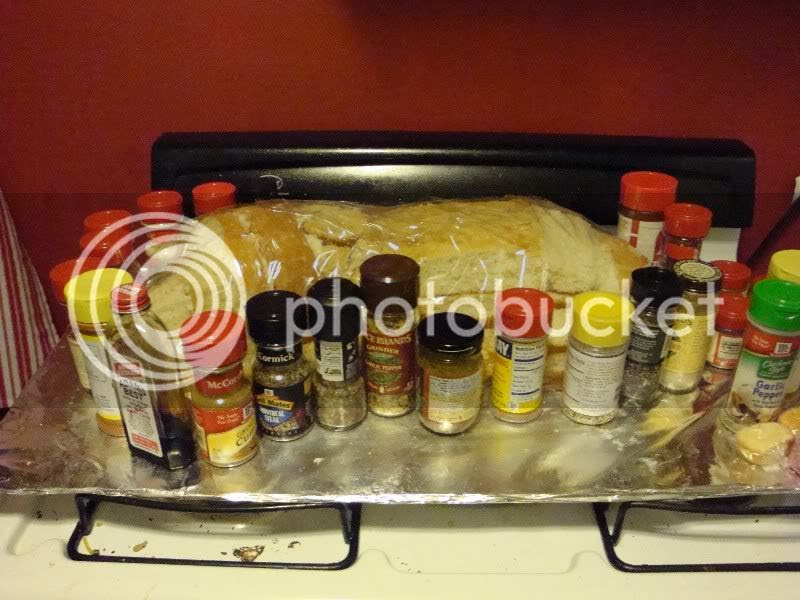 And this was what was left. 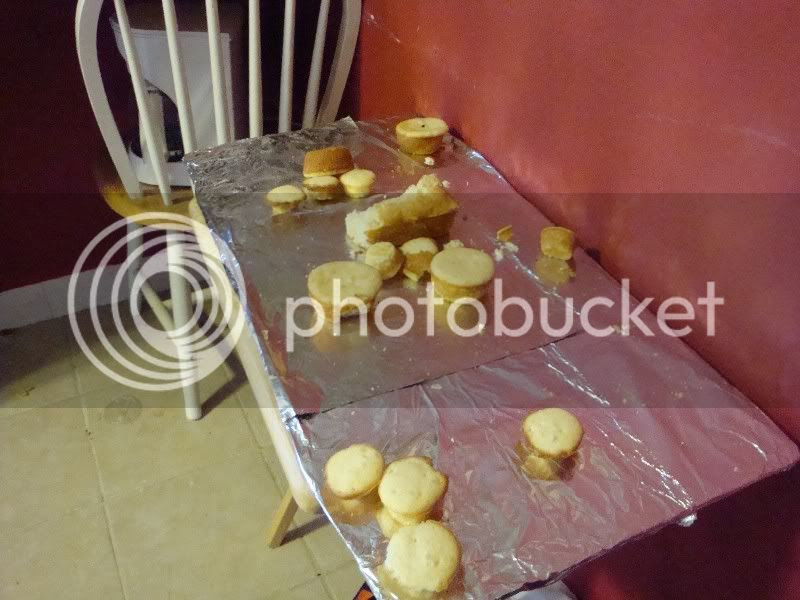 From forty cakes to four. Jeez.

Next morning came time to ice. I had bought three containers of buttercream icing, and they covered approximately 85% of the cake. 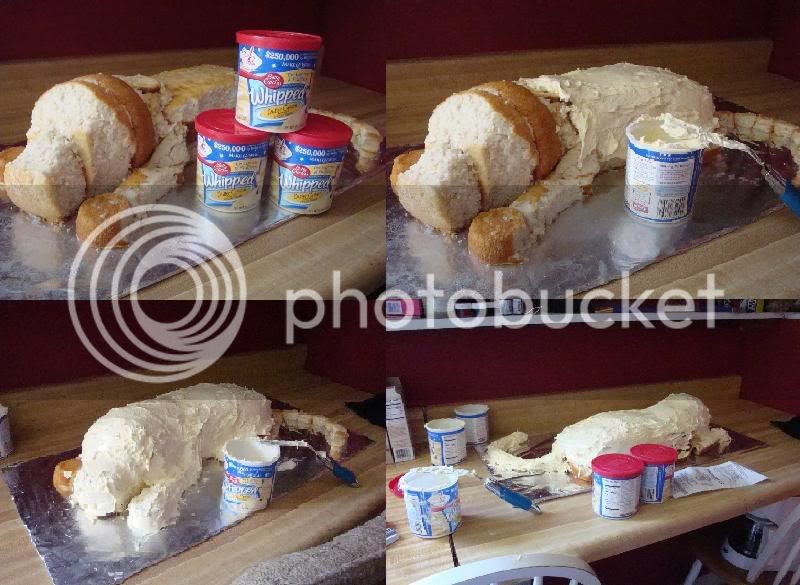 Of course, I had to do what I was trying so hard not to through very careful planning. I had to go out and get more. I bought two more containers of frosting but only ended up using half of one. The other is spare, I’m sure I’ll use it eventually for something or other.

And here he is all iced up and super-cute. 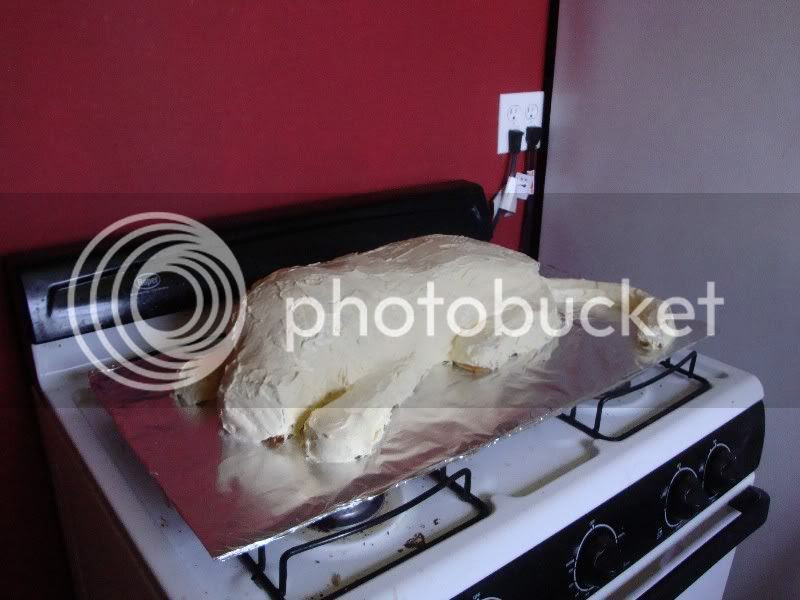 Next, came fondant. I’d show you how I colored it but I wasn’t about to go picking up my camera with food coloring all over my hands. Just imagine the most strenuous kneading process you can imagine and go with that. But with color. Next, you roll out the fondant. I’d heard to use cornstarch to keep the fondant from sticking, but I used powdered sugar which worked fine and was yummier. 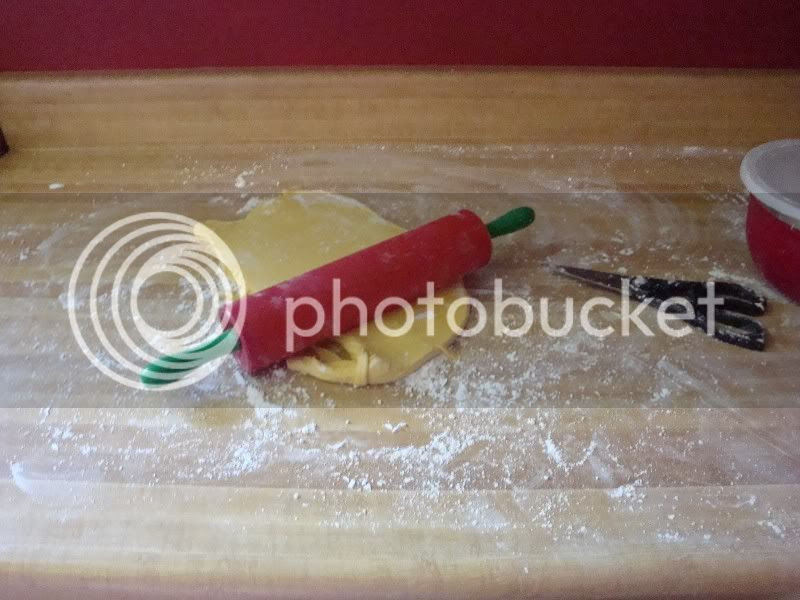 They sell a special rolling pin for this, but I used this one I got a buck at Christmas. As long as there’s no seam on it, it’ll be fine.

Also, I broke the cardinal rule of cake decorating. I covered him in pieces. Ordinarily, you should roll out one big sheet and lay it over the cake, then trim off any excess. But look at him, He’s all funny shaped. So I did the head, legs and tail separate. 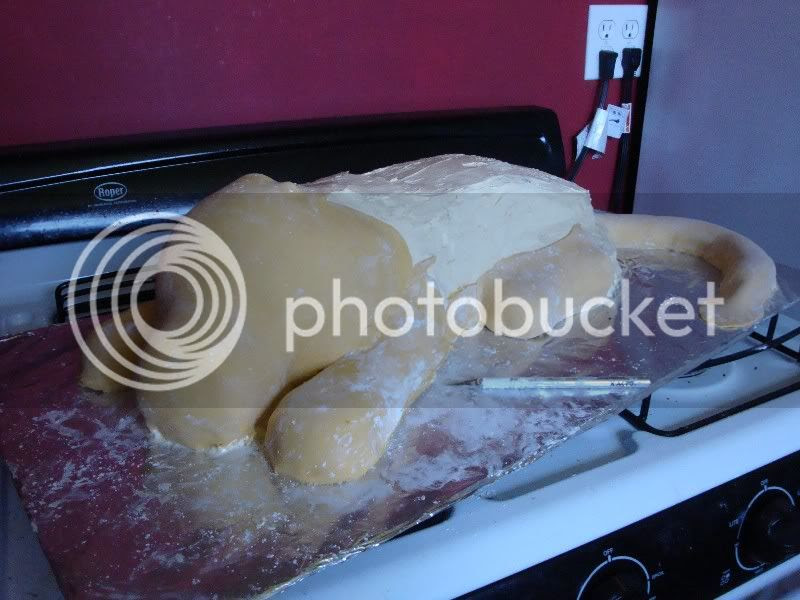 There were some flaws mainly around the neck, but I knew no one would see the neck area so I didn’t sweat it too much. 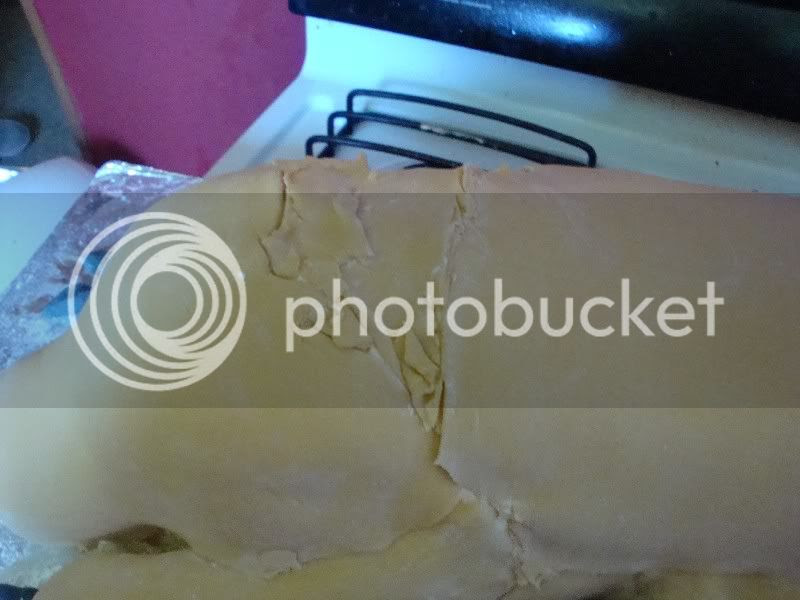 Then came more coloring, so no intermediary pictures again (Sorry!), but the mane was made by starting halfway down his back and gluing down triangles of brown fondant. To ‘glue’ down fondant, just mix up a little bit of gumpaste in some water and the stuff will stick like you were using super-glue.

And here is he 98% complete. (He still needs his horns) 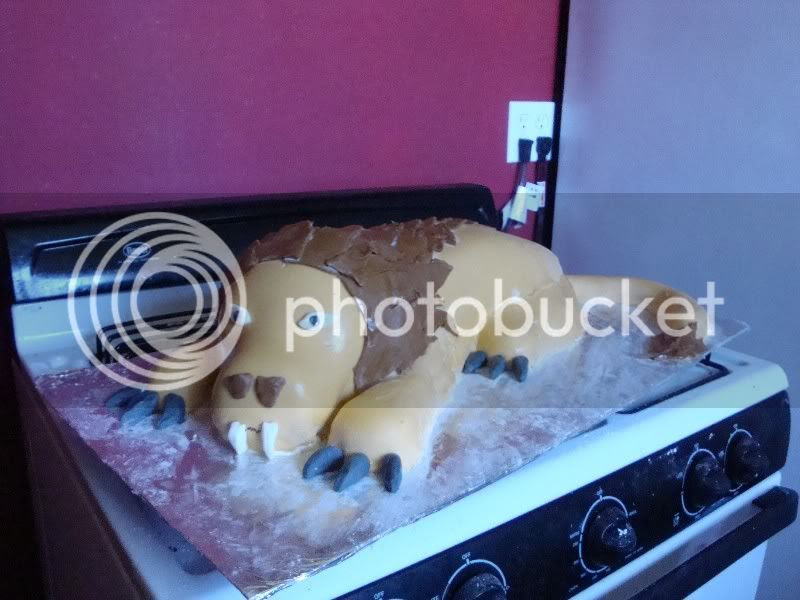 Hey! We haven’t heard from Stumpy in a while, let’s check in shall we?

In the last few days, Stumpy has gotten some detail work done. His loincloth is snazzier and he can see now, so that’s good. 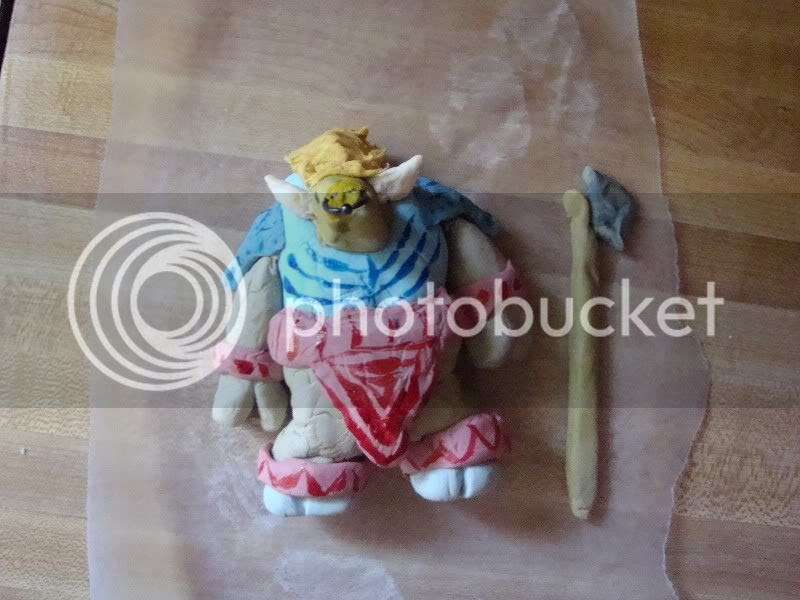 But what you really want to see isn’t Stumpy, it’s the final Tauren-Cat. I’ll finish off with the picture but I want to say this, if I had a better eye for detail and wasn’t so prone to losing my patience the cake would have been a piece of… well… cake. I’d totally do it again, and I learned things.

1. Own a paintbrush to use in the kitchen. This is for dusting powdered sugar off of fondant, or any number of other uses, but that one springs to mind.

2. Fondant is not so difficult to work with as one might think. Seriously, once I got the hang of rolling it, it was a cinch.

3. I am the coolest friend ever. We all already knew that, but I totally am.

Remember what we started with? Let’s do a before and after like they do on reality shows. 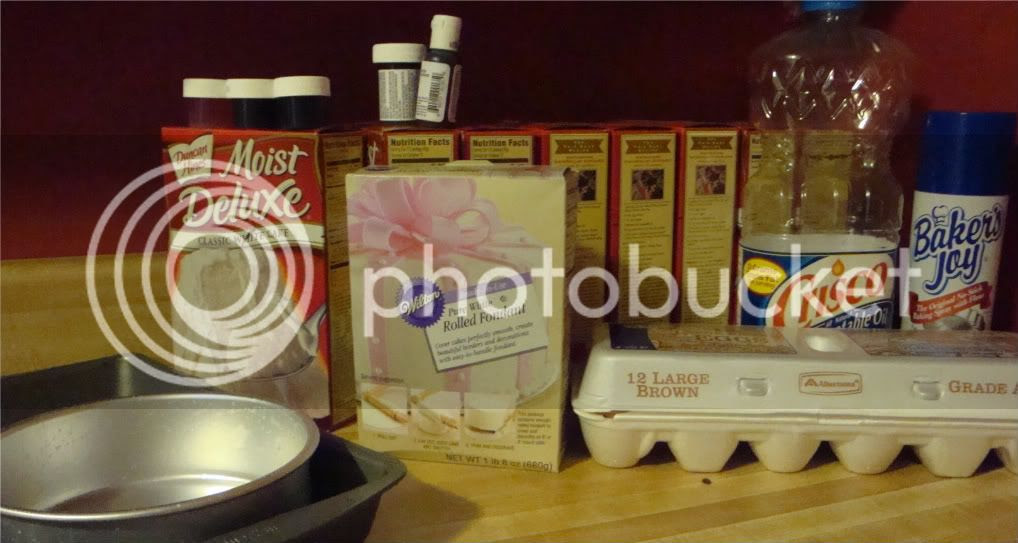 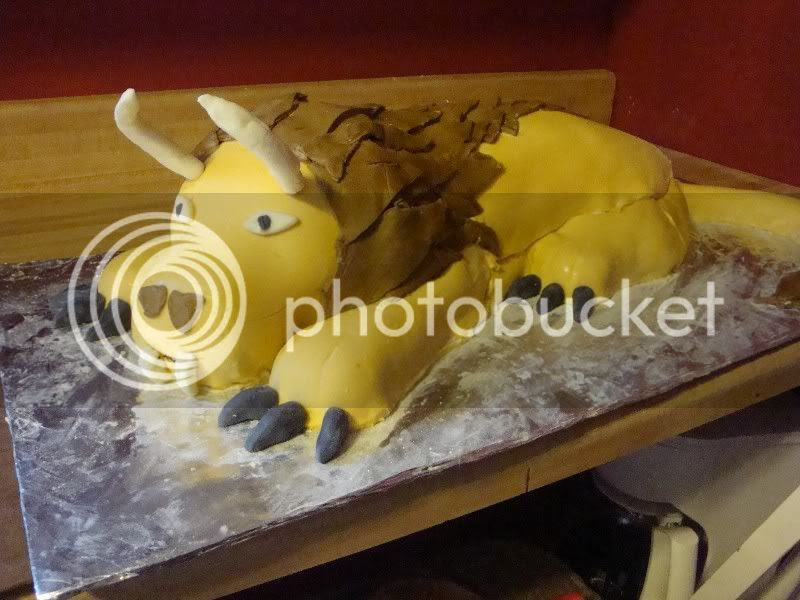 Update: R liked his cake, although I forgot he was on a diet so probably not so much with the eating. The SO was very impressed, thus not a total wash. Also, Stumpy's arm fell off as we were leaving the house. Also also, I got a job offer for a pastry chef position from someone at the restaurant. But with very little pay and very early hours so that's a no. Yet very cool.

Over the course of the next couple of days I will be attempting to turn this...

Into one of these... 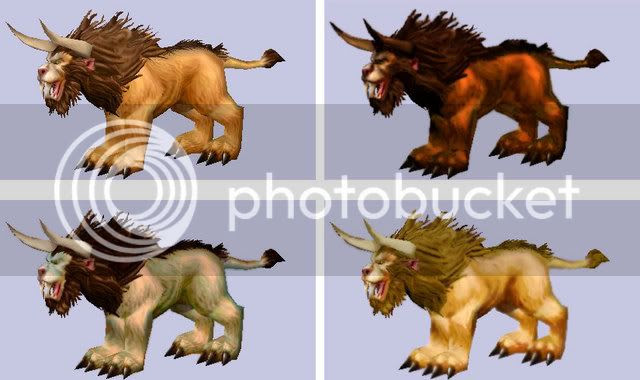 Those of you who are of a religious inclination, pray for me.

(I will be posting about the process, but probably in stages as Holy *Shark* this is going to be interesting)
Posted by The Heroine at 12:19 No comments: