I, on occasion, have way too much fun at work. The weekends can be very slow and once you have cleaned every shelf, vacuumed every floor and rearranged all the stock there's only so much you can do.

Rather than stand and stare off into space - or do homework - I have been known to make up games and stories about some of the stock we have. Sunday's offering was about Larry the Dinosaur which I was so happy with I am going to repost it here - slightly embellished.

It was a beautiful day down at the dinosaur watering hole, where the dinosaurs were discussing their day's plans... 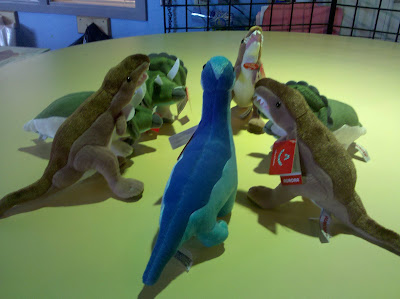 "Did you see the spikes on Sherryl?" asked Vicky Velociraptor.

"Oh I know it, those osteoderms are so last... oh no," Tricia sighed, "great asteroids above, Larry's coming. Quick, don't make eye contact." 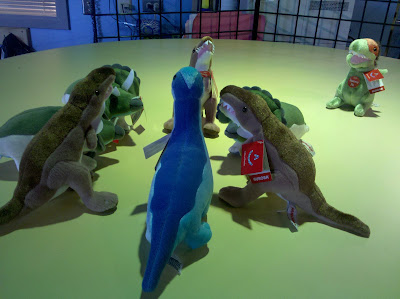 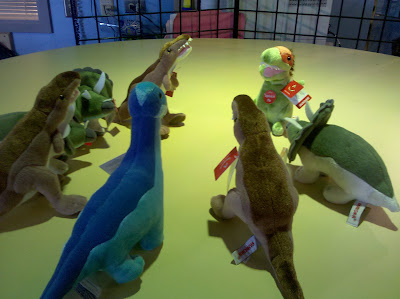 "Um, it's not a party Larry, in fact we were just..." Vicky let herself trail off as all the dinosaurs found somewhere else to be. 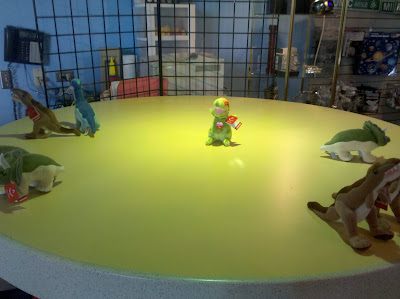 Poor Larry, left all alone. No one wants to be your friend. 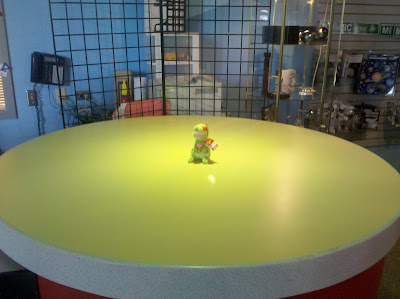 Like many before him, Larry consoles himself with candy, but it only lessens the pain for a moment. And it leaves him with a terrible tummyache. 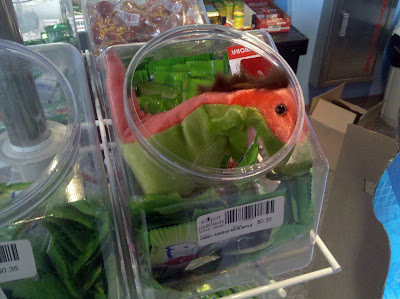 Feeling dejected and unloved, Larry makes his way across the shop floor. He climbs the tallest mountain in the land with every intention of ending it all. 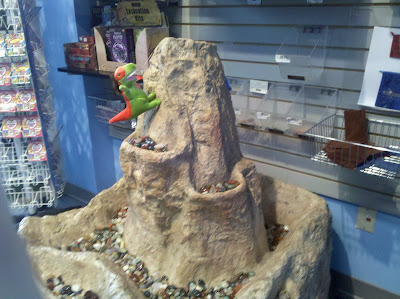 Oh no Larry, don't do it. You have so much to live for! 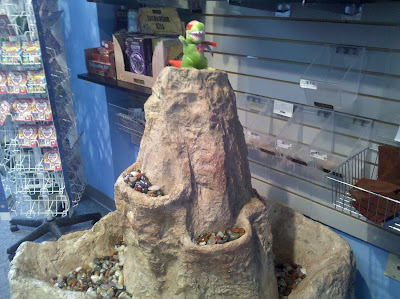 But what is this? Larry isn't alone after all?

"What are you doing down there?" 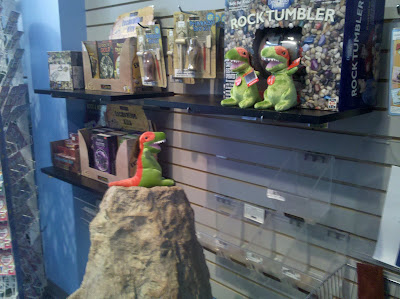 Larry is all smiles, "I was going to expire from loneliness, but now I see I'm not alone at all!"

"Of course you're not, don't be silly. Why are you so lonely?"

"The other dinosaurs are mean to me. They don't want to be my friends."

"Really? That's not right." The two dinosaurs on the shelf exchanged a glance, "Come up here, I think we have an idea." 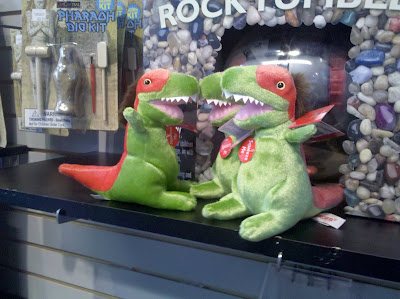 Their discussion is quick and interspersed with wild gestures.

"Miss Heroine, would you let us borrow something out of the storeroom?" asks Larry.

I think on this a moment, but the other dinosaurs were pretty mean to Larry and I have to admit, I was a little curious about what they were up to. "Sure guys."

They found what they needed right inside the door. 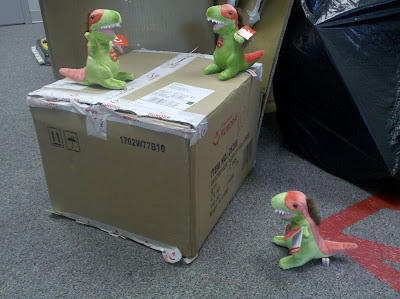 Pushing the box over to the counter, they investigated the contents of one of the rummage drawers. 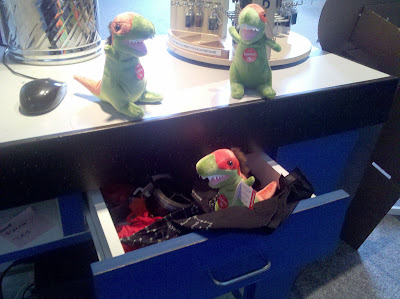 [Alright y'all, I want you to listen to me here and heed me well. If I had known the full extent of Larry's plan I would have stopped him. He's a little guy and while he's got lots of pointy teeth, they are made of felt and I'm pretty sure I could have taken all three of them on in a fight.

But at no point did it occur to me that they were going to take things in the direction they did.

Okay? I just wanted to deny all culpability in what is about to happen. The following are the events as best I remember them.]

After spending some time with their materials, during which I had a customer or two to check out, I came back to find this set up... 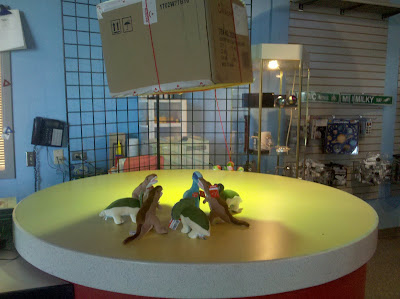 Can you see the little hellions? Hiding over the far edge of the dais? I didn't notice them at first either and it took me a moment to realize what I was seeing. By then it was too late. 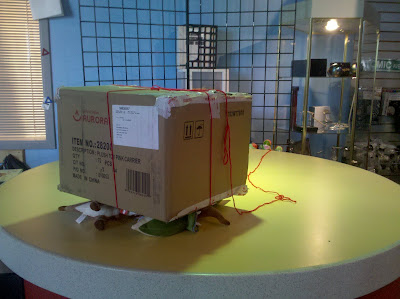 "Oh sweet heavens Larry, what have you done?

You squished them, I think they might have gone to plush animal heaven, what are you guys...

Quit celebrating. You are in trouble young dinosaur." 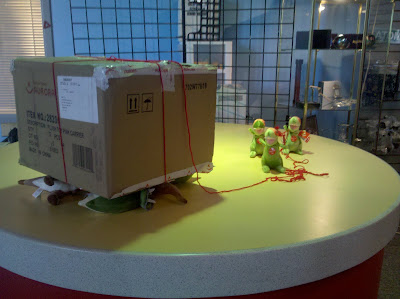 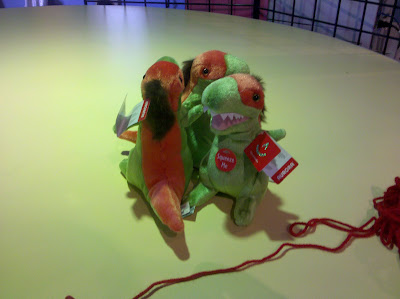 I have to admit, it's hard to be mad when they look so pleased with themselves.

Well, the moral of today's story was supposed to be about how it's okay to be different and that making friends is easy if you just try... 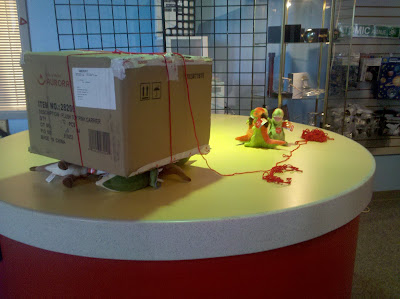 Yeah, that went off the rails pretty quick. Although I have to say... 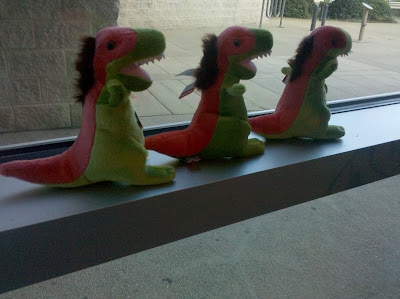 In some ways, maybe it was about those things.

I have been ruminating on the events of this video for a few days now, a video I'm pretty sure some if not all of you may have seen by now.

Let me say up front, I don't play WoW. I tried to get into Star Trek online, and I just don't have the temperament for MMORPGs. However, I have on occasion poured innumerable hours into a project and while I cannot speak for gamers as whole, I can speak based on both my experience as a geek and as a girl...


First, I hope that was his apartment they were in and I hope he threw her on her ass then and there.

Second, that was a truly despicable thing for her to do. I understand the "gamer widowhood" syndrome that some ladies feel they are a victim of. Their husband/boyfriend spends too much time playing video games and not enough time with them. I get it, really I do. But ladies, I have a secret for you...

No one is making you stay with that guy.

How he spends his time is his own damn business and if he isn't fulfilling your needs, find someone else who will. You don't like that he plays World of Warcraft all the time? There are millions of guys out there that think WoW is a seventies cover band.

What you don't do is be a passive-aggressive bitch about it and undo countless hours of his hard work. It doesn't matter that it was in a game, he assigned value to it which makes it valuable. Your perceived notion that it is not valuable has no bearing on this situation.

I feel so much pain for that guy and I hope he walked into the other and room and said two words to her, "Get out."

The woman I love

This should more fittingly have been included back in February for Valentine's Day, but it surely one of the most moving speeches ever made about love, or about the things people will do for love.


A few hours ago I discharged my last duty as King and Emperor, and now that I have been succeeded by my brother, the Duke of York, my first words must be to declare my allegiance to him. This I do with all my heart.

You all know the reasons which have impelled me to renounce the throne. But I want you to understand that in making up my mind I did not forget the country or the empire, which, as Prince of Wales and lately as King, I have for twenty-five years tried to serve.

But you must believe me when I tell you that I have found it impossible to carry the heavy burden of responsibility and to discharge my duties as King as I would wish to do without the help and support of the woman I love.

And I want you to know that the decision I have made has been mine and mine alone. This was a thing I had to judge entirely for myself. The other person most nearly concerned has tried up to the last to persuade me to take a different course.

I have made this, the most serious decision of my life, only upon the single thought of what would, in the end, be best for all.

This decision has been made less difficult to me by the sure knowledge that my brother, with his long training in the public affairs of this country and with his fine qualities, will be able to take my place forthwith without interruption or injury to the life and progress of the empire. And he has one matchless blessing, enjoyed by so many of you, and not bestowed on me -- a happy home with his wife and children.

I now quit altogether public affairs and I lay down my burden. It may be some time before I return to my native land, but I shall always follow the fortunes of the British race and empire with profound interest, and if at any time in the future I can be found of service to his majesty in a private station, I shall not fail.