It's that time of year again! Banned books week has come around, like a bad case of herpes.* Last year I honored the occasion with a repost of a review I did of Where's Waldo in 2007. This year you get a brand spankin' new review.

Since its release in 2005, one book has held the number one spot for most challenged book on the American Library Association's list. This book has at times been challenged as: anti-ethnic, anti-family, homosexuality, religious viewpoint, and unsuited to age group.

What is this book that does so much to threaten the minds of our children? 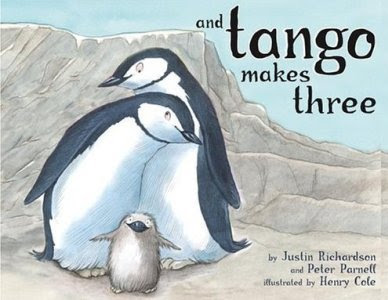 Y'all, its a book about penguins. Two penguins who adopted an egg and raised it in a loving pair unit.

The two penguins in question happen to both be male.

Apparently, this is indicative of a large-scale moral crisis in America. If even the penguins are turning to the radical left-wing homosexual agenda, what chance do our children have?

If you are a person with half a brain in your head, you read the above statement in the sarcastic tone it was intended. But here's the problem, there are people out there who actually believe this. That actually believe that by telling our children that two male penguins hatched and raised an egg together it might somehow undermine the very social fabric of this great nation of ours.

The thing is, it doesn't undermine the social fabric of our nation, it undermines their own preconceived notions of what makes a healthy society. If penguins - animals that cannot reason, love or pray to god - can have a healthy monogamous, homosexual relationship then the moral high ground that the same behavior in people is against the natural order of things fails. If penguins and giraffes and bonobos can create lasting homosexual partnerships then its not unnatural - it's not wicked mankind turning away from god. It's people doing exactly as god intended - or why would he allow the beasts of the field to do it?

People drive me crazy for the most part, and gut reaction and prejudice against one of the most adorable children's books I've ever seen is not just a waste of breath and energy, it is entirely unworthy of us as a species.

*I apologize to everyone for that analogy.
Posted by The Heroine at 08:07 No comments:

Labels: book review, don't be an idiot, loved it like cake

{I usually try to keep this blog light and amusing with any ranting I’ve done more for comedic effect. I beg your indulgence for this today, I couldn’t not write it.}

I spent five days in New York in August. I visited museums, met with friends, ate out for dinner and shopped with money I don’t have. In five days I never got within a half dozen blocks of where the World Trade Centers once stood.

The last nine years have been an endless litany of anger, because we never had time to grieve. We ranted and raved and lashed out at everyone around us, consumed by our own misery, our own pain - unable to accept help. We didn’t want help. We wanted to be angry, because being angry was all that we had. We curled into ourselves, nursing our rage and our hatred.

It felt good. It felt good to go to war and watch others pay for how terrible we felt. It didn't matter if they were guilty of crimes against us or not, they were surely guilty of something and we reveled in watching them suffer - because it eased our own pain. But vengeance is not justice. They could hang Osama bin Laden on Ground Zero itself, resurrect him and do it over again a thousand times and it would still never be enough. My grief, our grief, is too strong, too close to be satisfied by something so trivial as revenge. I remember as well as anyone the bone-deep need for reprisal, but vengeance is not worthy of us. Not then and most certainly not now. Vengeance is not justice, and somewhere along the way we have gotten the two confused.

We grieve still, but the anger is fading – not to be forgotten. As trite as the phrase has become it can never be forgotten. There are those who have reached out, who have called for acceptance rather than rage, but their voices are few in a wilderness. We have to accept it, accept that no matter who we kill, how many we blame it will never bring back the lives that were lost that day. And until we do that we cannot begin to heal as we need to.

We should never forget the events that happened on September 11th, 2001 – but we can and should begin to move on from them.

In which the size of my carafes is commented upon...

I set out this Labor Day in search of bookshelves. You see, I have somewhere in the neighborhood of a thousand books, as well as miscellaneous knick-knacks and pictures and the like that I would like to unpack from the varying boxes they have been sitting in for the last year or so. So off I went to Target, Bed Bath & Beyond, and Lowes. No luck. Target did not have the dimensions that I need and the other two don't carry bookshelves at all. With the nearest IKEA being 200 miles away in Dallas I fell back on the store we always fall back on here in the South - Wal-Mart.

I had just exited my vehicle and was in the middle of executing the Picard maneuver* when I heard a voice to my right...

"You have huge jugs."

I swear - my hand to a nonexistent god - it took me a moment to realize what he meant. I briefly checked my hands to see if I was perhaps carrying some sort of water-bearing device that I was unaware of. I have never in my life actually heard someone use that phrase. I mean, after I had ascertained my hands were empty of pitchers and canteens I knew what he was talking about, but it was not something that immediately sprang to my mind.

And once it did, I was kind of pissed. Who was this guy, cruising next to me in his pickup while hanging out the window to ogle me, who was he to comment with such blasé about my attributes? It's not like I had left the house in some sort of outfit that screamed "Look at me!" I was wearing jeans and a Flash t-shirt for chrissakes. I looked like what I was, someone who had left the house against my will and did not want to be messed with. And this fucker was messing with me.

Now, I'm sure I had several options at this point. Ordinarily, I would have ignored him. That's my usual reaction when guys are being absolute dickwads. Secondly, I could have screamed at him, tried to give him a piece of my mind. But he was in a truck and I was on foot - there was nothing to stop him from simply driving away at this point. So I did something I rarely do, a middle ground if you will...

(Keep in mind, this entire above thought process only took about two seconds in real time.)

I turned to him and, while playing with the hem of my shirt, said "Would you like a closer look?"

His eyes brightened, I'm not exactly sure what reaction he was hoping for with his pronouncement, but this was certainly not one he had expected. "Yeah!"

I lifted the bottom of my shirt about an inch and leaned forward, "Too bad. You're cute, but not cute enough to get away with a douche pickup line about my tits."

It took him a moment, and in that moment I got to watch the change come over his features. He was good-looking, which made his drive-by verbal molestation of me all the stranger. This wasn't the kind of guy who needed to resort to this kind of thing to get laid.

"Bitch," he said as he turned back into his truck.

"Dumbass," I got out before he drove off.

In retrospect, the whole thing was pretty hilarious, and I giggled about it the entire time I was in the store. Huge jugs? How exactly did he think things were going to pan out? That I might throw myself through his window and offer myself to him in a fit of lust, overcome by his eloquent words of seduction? That I might turn, curtsy, and thank him for his kind thoughts? What was really going through his head in that moment?

I'll leave you with Jerry Seinfeld about what men are really thinking.


(*The Picard Maneuver for those who don't know is when, after having been sitting, you pull the bottom of your shirt down as you stand up to keep it from riding up awkwardly.)