Me, checking twitter, I see that the Giants and the Patriots are playing in the Super Bowl this weekend. I turn to a friend, R...

me: Hey, I didn't know the Giants made the Super Bowl, that's cool. Like a total east coast versus west coast thing.

me: You know, how there both on the coasts.... away from each other.... [I'm making hand gestures to help him.]

R: Yeah, except they're in neighboring states.

me: Wait, I thought the Patriots were on the east coast somewhere.

me: And the Giants are in San Francisco.

A pause while I take this in, a confused look on my face...

me: It's not the San Francisco Giants?

I'm usually faking being sports dumb, but apparently closer to the truth than I thought it was.
Posted by The Heroine at 11:34 No comments:

Why I love my friends/family... 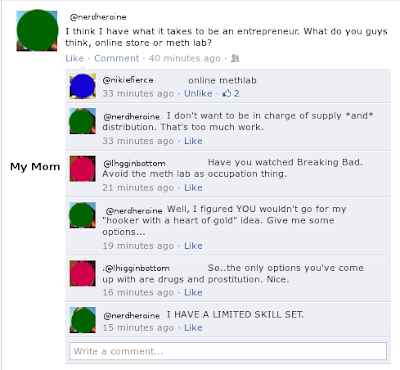 “For a political party that's all about pulling yourself up by your bootstraps, [Republicans] rely on god for a lot of handouts. These are the same people who tell the single mother who was just laid off ‘Oh, you can't get unemployment or food stamps. What am I gonna do? Well I’m gonna talk to my friend in the sky to help me.’

That is cheating and Ronald Reagan would be ashamed of you.” - Jamie Kilstein
Posted by The Heroine at 11:29 No comments: