I am trying to turn my laptop into a dual-boot. Keeping Ubuntu on one-side and installing Microsoft on the other. For all my love for Ubuntu - I have a laundry list of products that don't support using anything but Windows and thus - here I am.

I am, however, having problems installing Windows 7. I was warned that the 3-pack of installations that my father bought had buggy product keys and that I was going to have to call in order to have it fixed. I was not looking forward to this, but whatever. We use Windows 7 at school and I rather like it, so let's do this.

My phone call to Microsoft - with a VERY SPECIFIC problem - took me an hour and a half to finish. I say 'finish' not 'resolve' because... well, I'll get to that. In the course of this call:

1) I was transferred upwards of eight times. Three of those were not to other departments, but back to the main menu where I would have to start the entire process over.

2) I was accused, vehemently, of having them on speaker phone since they couldn't understand me. One lady even went so far as to circumspectly accuse me of lying to her when I maintained that I wasn't.

3) The man who finally took on the apparently gargantuan task of checking my product key comes back only to tell me that their system is down and can I call back in an hour. He later rescinded this and did some sort of magic - but seriously Microsoft? You don't inspire confidence in your product when I call into your own support center and the system is down. You should look into that.

5) I apologized for raising my voice to him, asked to speak to someone else and that man then hung up on me. I kid you not.

There is a reason... there is a reason I happily switched to a Linux-based system two years ago. A system that has never crashed, never failed and never given me one frakkin' problem. I still need to do a Windows install. There are programs I need for my summer teaching fellowship that just don't work on Ubuntu. But I will be damned if I use a legal copy.

Microsoft - you have turned a girl who has legally downloaded every song she owns into a pirate. I hope you're happy.

Labels: don't be an idiot, god damn it, Lovelace, open letter to...

Yeah, that's totally Dame Judi Dench in a cameo. Totally.
Posted by The Heroine at 06:23 No comments: 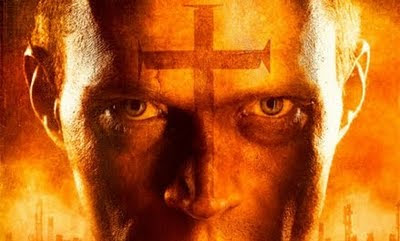 Priest takes place in a world where, due to a war with the extremely superior vampires, humanity has taken refuge in large city-state compounds where they are protected by a dominant and creepy church. A church that seems to have forgotten half of scripture - or maybe in this world the Bible reads "Let humans rule over all the earth, and over all the creatures that move along the ground. Except vampires. Seriously, those guys will fuck you up." To combat the vampires, priests are created/born/magicked/summoned/trained (it's not really made clear) to fight the vampires and they do a damn good job as by the time the movie begins vampires are all but eradicted.

Enter the plot: A young girl who is related to our main character is kidnapped by vampires, including vampire Karl Urban. She is a lot more upset by this than I would be. Our hero, who doesn't have a name, sets off on an epic quest to rescue her - defying the church and picking up some help along the way. His non-spoilery help is an outland sheriff. His spoiler help is another priest, this one a woman who is desperately in love with him - one can only assume because he is Paul Bettany since he's quite clearly not interested in pursuing her in any way shape or form. 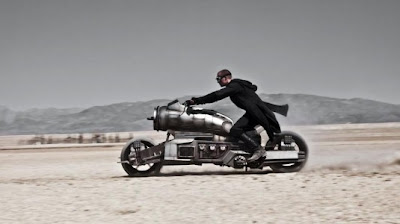 Someone was really proud of those motorcycles is all I'm saying. And if I can digress for a moment's not-really-spoilers nitpick: At points in the movie we see our characters on these open motorcycles going upwards of 200mph across the desert. I don't know if you've ever stuck your head out a car window (or ridden a motorcycle I suppose), but it becomes extremely difficult to breath once you hit about 60. Watch your dog sometime, he'll pull his head in around 45-50. And yet, our heroes seem to have no problems. Now, there is a scene where the pull up somewhere and take off both goggles and pull off respirators - which would explain how they manage to breath. But it's one scene in what is, dead serious, 64% of the movie. The rest of the time I kept expecting them to blackout and fall over mid-ride.

Anyway, back to the review.

On the plus side the CG was good, nothing to complain about and for the most part blended seamlessly with the movie. I would like to meet whoever did the matte-painting of the cities because they were pretty awesome. The vampires had some issues with actually being in the scene, not just comped in, but all in all the effects were enjoyable and were it not for the plot issues I'd say might be worth the money for 3D (even though it wasn't filmed in 3D and it irks me to pay an extra $6 for an often poorly rendered visual effect).

This movie had one of two major problems - and I find it hard to write about because I'm not sure which exactly it was suffering from. And the two are exact opposites. Either:

A) Priest had too many plotlines. I only cared about maybe two and the rest were boring and felt like filler. I HATED the sheriff character and wanted nothing more than to punch him in the face several times and tell him to STFU - Cam Gigandet did his best to sell the character, but he wasn't given an awful lot to work with. It should have been pared down to just Paul Bettany and Karl Urban - although the 'plot' concerning Urban's character could have been dropped too and just left him in for the pretty value. I enjoyed the character, don't get me wrong, but his motivations were never fleshed out enough to make him interesting. If they had cut everything down to just Bettany and made it into a futuristic vampire version of Taken it might have stood a chance.

B) There wasn't enough plot. I felt like there was this whole world to be explored - mysteries and intrigues and mythology that just never got touched upon. Is this story earth? Apparently not because humans and vampires have supposedly been engaged in a bloody war forever - not just recently. But if it's not earth - why the hell do they have the same bizarre church with the same bizarre mythology? Who made the priests? Why does vampiring work the way it does? How vampires work at all isn't really explained and some of the things that were said seem to contradict each other.

Somehow, defying all odds and logic to how stories work, Priest managed to stay perfectly between these two. The result of which is it had exactly the wrong amount of plot.

[Note: Okay, I know it was a comic book and thus the original source will likely answer some of my questions - but don't ever adapt something that can't stand on its own. It's like, the first rule of making an adaptation. See: Why Lord of the Rings was 10 hours long.]

[Note 2: I'm going to say right here, before I go any further, that I would LOVE to see a director's cut of this. I sincerely hope that they just cut too much out for the movie to stand up on its own. An editing mistake rather than 'this whole movie is awful' mistake.] 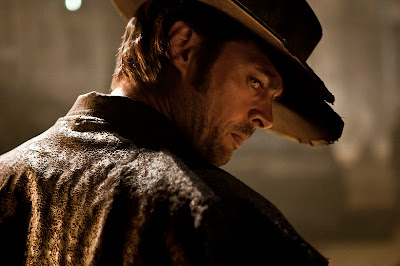 All props to Paul Bettany - and lord knows I love that man and I would go see anything he was in because he succeeds splendidly more times than he fails spectacularly - but this movie was just not good. And it was trying too hard to be good to be awesomely bad. Both he and Karl Urban acted their hearts out - and you could tell for sure that Urban was enjoying himself immensely - but you can give an Oscar-worthy performance in a movie and it won't change the fact that it's about Catholic Old West Vampires.

I feel like this movie should have been to vampires what Firefly was to scifi. A different take on an old formula that might have revitalized an entire genre. And maybe as a comic book it was. But as a movie, Priest lacks the charm to be endearing, the polish to be dramatic, and the cajones to be scary. All in all, it failed as a movie at the most basic levels.

With all the love in my heart for Mr Bettany and Mr Urban, I wish I had my $9 back.