Who told you that?

I don't understand... I literally have no frame of reference for what happened to me last night. I was studying for a midterm in Astronomy when I took a break to go tell my dad some fun facts (one day, one day my house remodel will be finished.... sigh).

"Hey dad, did you know that if you could find a sufficiently large pool of water Saturn would float?"

"Is that because it's gas?"

"Oh, and if Jupiter were any bigger, it would be a star. I mean, phyiscally bigger, it'd have to be about eighty times more massive, but that's okay."

"A star huh? So what would that mean?"

That made me pause, not because I didn't know the answer but because the answer seemed so obvious I wasn't sure what he was asking. "Uh, we would be a two-star system. We'd have the sun and Jupiter both."

There are moments in your life, gentle reader, where despite not actually living in a movie you will find your life suddenly has sound effects. I heard this one: screeeeechh (It sounded a lot like a record needle scratching off of it's groove if that helps).

"A planet?" I'm pretty sure I started spluttering incoherently at this point. "No, no. It's a star, it just happens to be our star so we named it the Sun. Kind of like how we named the moon 'Moon'."

"Humph, who told you that?"

"Who told me-?" Sometimes I can't tell when my dad is messing with me or not, but we've talked about this since then and let me tell you: he was dead serious. He had no idea.

I suppose I shouldn't have been surprised, this is the same man who constantly argues with me over how we know anything we do about astronomy since we can't actually see it or measure it.

I say again, my father has so little understanding of what I want to do with my life that he honestly believes that we will just be making it up as we go. This both worries me and saddens me an awful lot.

Labels: astronomy, don't be an idiot

First of all, yes it's a load of bull. There are a lot of people out there who have covered the details of it better than I: see Phil Plait (I love you) here, or Dean Burnett here. If you believe that the astronomical position of the stars when you were born have some sort of effect on your life I have a bridge to sell you. Also some snake oil and the true blood of Jesus.

Even if you do believe in the hocus-pocus involved here, I've got fifty bucks that says you're not even doing it right.

Astrology is based on where the sun seems to be in a certain predefined set of constellations on the day you were born. Thus the sun was in the constellation Pisces when I was born in late February. As the earth revolves around the sun, the sun appears from our point of view to move through these constellations.

Y'all probably knew all of that, at least in passing fact. At some point you opened a newspaper, saw a strange looking word next to a set of date encompassing your birthdate and found out it was your "star sign". You've spent a fair portion of your life aware of your "star sign" even if you don't give a fig and think it is as silly as I do.

The astrological calendars that were cobbled together were done so several thousand years ago. Which is all great and good if you're Sumerian*, but if you're a modern person like me it doesn't do you much good.

Stars, you see, move. They're moving and we're moving and the position of the stars in the sky is constantly changing. Enough that you might even notice a couple in your lifetime. Barnard's Star, for example, is practically rocketing across the sky at a rate of about 10 arcseconds a year (click for the wiki article which has a great graphic of Barnard's movement across the sky). That's a lot, for the record.

What it boils down to is that while a few thousand years ago if you were born in late February you would have been and a Pisces like me, these days the sun was more likely to be booking it through Aquarius when you were born. The first is your and mine astrological star sign, the second is our true astronomical star sign. Neither have any effect on your life by the way.

Basically, if you want to believe in astrology you get down with your bad self. I will continue to make fun of you and make very low estimations of your intelligence. But at least get it right. 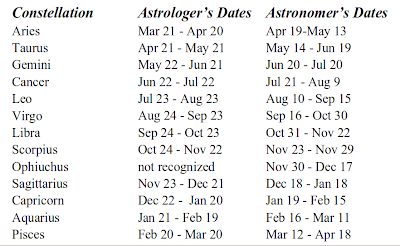 "Uh... hi. My name is Nerd Heroine and I have bad taste in movies."

"I guess it started when I was a teenager. Other kids were talking about how good Braveheart was, I was sitting at home rewatching Tremors over and over."

"It just got worse and worse. ConAir, Snakes on a Plane, Star Trek: The Undiscovered Country, Young Guns 2. And it wasn't just a little here and there. I got into some really hard stuff: Deep Blue Sea, Alien3, Batman & Robin-"

"I know, I know, but the batsuit had nipples, how could I resist something that awesome?"

"It sounds like you had a real problem, what happened?"

"Oh I did, it got really bad for a while, I was watching the Star Wars Christmas Special and it wasn't even on a dare. Then I met someone, and for the first time I was ashamed. I mean, I never had been before, it never occurred to me that what I was doing was wrong you know? But suddenly I was watching clips on youtube and my DVDs were in a box in the attic. I didn't want him to know. I was terrified he'd find out. And one day, we went to see... oh god, it was awful."

"Let it all out, you'll feel better."

"I know! I wasn't even thinking and he asked if I liked it and I just blurted out how great it was. The look in his eyes, I can still see it..."

"It's okay, it's okay. You've been walking a long and lonely road Heroine. Acceptance is the first step toward healing, you're on the right track. We can help you."

"Oh no, no, you don't understand. He liked it too! It turns out he doesn't have great taste in movies either!"

"Honey, this man, he's an enabler. You should get far away from him."

"No. You need to look inside yourself, do you want to be that person? The one with the crazy DVD collection?"

"If you're not serious about getting help you should leave."

"I don't want help, I just want to let you know that there is someone out there for you, someone who will sit on the couch and watch Jaws 3 with you."

"I'm still working on Batman and Robin, I'm not sure he's ready for that yet..."

[All events above are purely fictional and comedic. I went to the midnight showing of Terminator: Salvation by myself. And it was awesome.]

I don't really like to label one thing over another as being the "best" because it's all subjective and I don't want to hurt anyone's feelings and really, at any given moment what is "best" is likely to change. It may also change depending on who I am talking to at any given moment.

All that being said.... I received the best birthday present in the mail last Monday from J. Yes it was a week late, no I do not care.

I got comics. Not just any comics either, BATMAN comics. Oh! and Buffy comics (which I really enjoyed, but come on... Batman!) 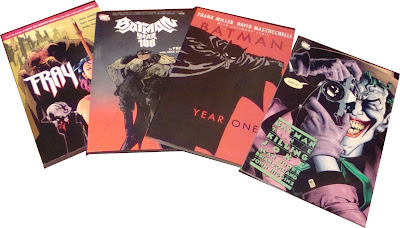 Did you just hear a choir of angels sing? 'Cause I sure did.

In case you can't see, the is Fray, Batman Year 100, Batman Year One, and The Killing Joke. All of which I read the same night. That's how excited I was. Is this the wrong place to admit that I had never read any of these before? In fact, my only Batman collection until now 'Arkham Asylum'.

Someone knows how to make me happy, let me tell you.

There were a couple other things in the package, but they were personal and without specifically talking to J (and because I want to keep some portion of my personal life private) I am not including them. Y'all will live, I'm sure.

So as a note to anyone out there who wants to win my eternal love and devotion, this is how you do it.

Can I also add here, that this post gave me reason enough to create a 'Batman' tag, and all is now right in my world?

Ok Go - This too shall pass

I am such a sucker for a Rube Goldberg machine, I really am. This is truly the best I have ever seen. The best part is, this is actually the music video for the song "This too shall pass" and I can only assume the guys in it are OK Go themselves.

On the 7th December, 1945 Japan attacked Pearl Harbor naval base in Hawaii. The next day President Franklin Roosevelt gave a speech on Capitol Hill asking Congress to declare war on Japan. As alway, please click on the link to read the full text.

It will be recorded that the distance of Hawaii from Japan makes it obvious that the attack was deliberately planned many days or even weeks ago. During the intervening time the Japanese Government has deliberately sought to deceive the United States by false statements and expressions of hope for continued peace.

The attack yesterday on the Hawaiian Islands has caused severe damage to American naval and military forces. I regret to tell you that very many American lives have been lost. In addition American ships have been reported torpedoed on the high seas between San Francisco and Honolulu.

But always will our whole nation remember the character of the onslaught against us. No matter how long it may take us to overcome this premeditated invasion, the American people in their righteous might will win through to absolute victory.

I believe that I interpret the will of the Congress and of the people when I assert that we will not only defend ourselves to the uttermost but will make it very certain that this form of treachery shall never again endanger us.

Hostilities exist. There is no blinking at the fact that our people, our territory and our interests are in grave danger