Real conversation (names changed to protect the innocent) (Neither was me for the record.)

Dan: "While I'm in Dallas next week some of the guys are taking me to a Mavericks game."

Carol: "You? They're taking you to a Mavericks game?"

Carol: "You have absolutely no interest in sports."

Carol: "Tell me something, what sport do the Mavericks play?"

Carol: "Are you sure? Are you sure you don't need to bring a jacket because it's hockey?"

Dan: [goes off to check internet]

With all due respect to Cleolinda's Secret Life of Dolls...

So much has happened since February that I don't really have any idea where to begin.

We had some problems when last we spoke of my toys, namely because Edward had given in to his baser urges and murdered one of my pony. It was kind of my fault, but at least 60% of the blame falls on him. At least. Also, apparently she tasted like rainbows. Make of that what you will.

The thing is, although he certainly murdered her, he didn't exactly kill her. There were, *ahem*, complications. 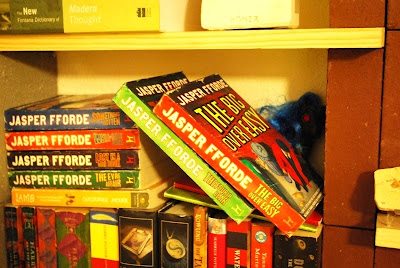 We also had a problem as she's spent the last few months causing a great deal of mischief. Nothing too crazy, I would find jars of food left open on the counters, toilet paper unrolled in the bathroom, Lego buildings dismantled and scattered where bare feet could stride on them and then curse the days they were born. Stuff like that. She hasn't, it seems, been eating anything that I know of which I find odd and would like an answer to all things considered. I had sent my best second-best a pretty good hunter after her, but he had thus far met with nothing but abject failure. 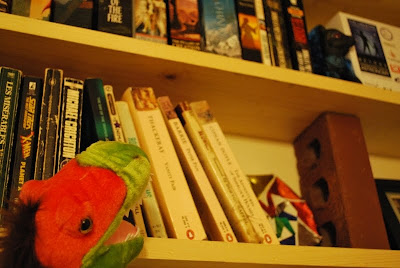 Yeah, that's the Star Trek/X-Men crossover book you see to the left of Larry.
What of it? 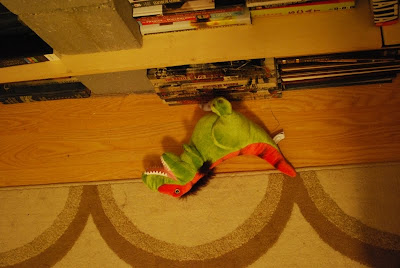 From above me I heard a light, tinkling cackle. Like windchimes being put through a shredder. It was more than a little disturbing.

"Could have gone without hearing that."

Me too. Wowzers. So obviously Larry was useless-

That was said in text, you can't hear me. Don't ignore the laws of narrative construction dude. ANYWAY... Larry was useless and the best scientific minds available were of no help - either on the capturing her or curing her front. 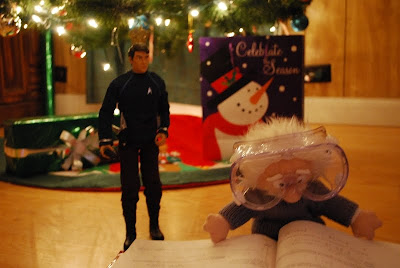 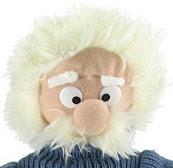 "Get ahold of yourself man, you were made in China."

No. That's racist, stop it. Stop it now.

"If you could catch her, bring her in for study we might be able to reverse the process. It would help if we could talk to that glittering grasshopper-"

Otherwise occupied? What is more important than saving Moon-" 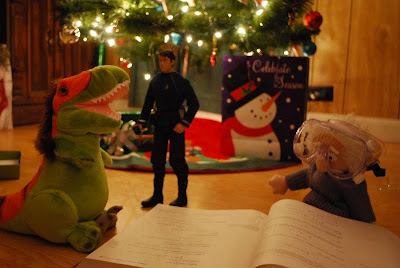 "Have you, in fact, accomplished anything these past few months?"

"I cleaned out from under the bedroom dresser."

And we all appreciate that.

"Have you even gotten within two feet of Moonshine?"

Larry sighed and hung his head, "No." 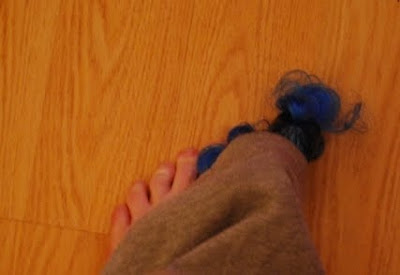 Larry rushed at my foot, stabbing me with his big ole toe claw in the process. Which also hurt. He roared and chased after Moonshine while I submitted myself to triage from McCoy. 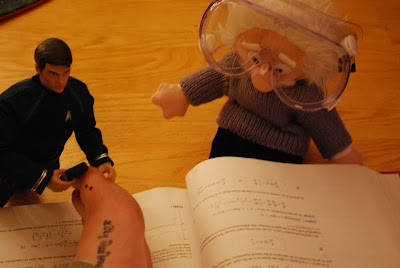 Am I going to turn into a Vamhuman now? That sucks.

"You know, I'm pretty sure they're just vampires at that point."

I did not ask for lip from you. The important question is am I going to turn into... oh god, I'm sparkling, I'm starting to sparkle. Make it stop, MAKE IT STOP.

"You are not sparkling. And wow are you yelling a lot today."

I JUST GOT BIT BY A SPARKLEPONY, I THINK I HAVE THE RIGHT.

"Shhhh, shhhh. If you quit shouting there will be a lollipop for you after."

It took me a moment, but luckily Sam came to my rescue. 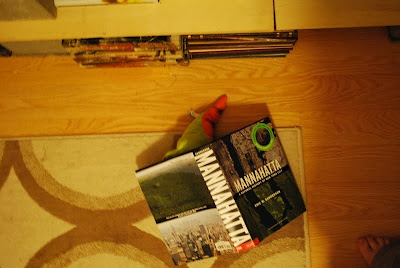 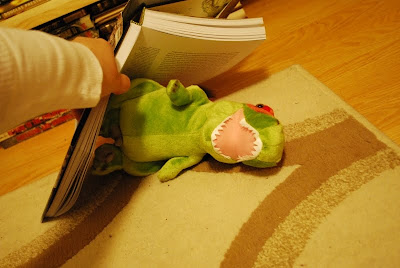 You have to admit it is a little karmic all things considered.

Wow that's a big book. Where did that even come from, why do I own this? Also, not a good day for you is it?

You broke your orange? How does that even happen?

As I watched Larry limp away, tail dragging limply behind him, it occurred to me that it might be time to turn to a better class of hunter than Larry who, for all his pomp, doesn't really move at anything better than a brisk waddle. Unfortunately, my options here were extremely limited. My second-best hunter... well... 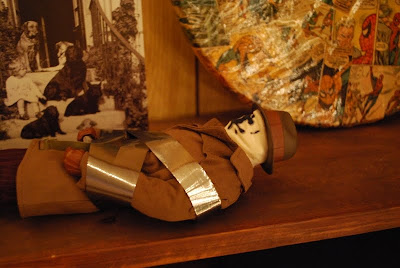 There were, shall we say "issues" when I introduced Rorschach to the household last summer. I had started by keping him pretty well confined to the closet with a small blank notebook on a keychain I won out of a bubblegum machine last year. This worked well until I caught him waterboarding Larry in the bathroom sink while demanding answers on where all the other dinosaurs went. Larry was mostly unaffected by this, although he was pretty soggy for a few days. Since then, I had kept Rorschach tied up but in sight.

"What exactly is it you expect I'll do?"

Set the place on fire? Murder the godless liberal Tolkien dolls? Kill the neighbors dog? The opportunities are truly endless.

You comfortable up there? Need anything? I'm all out of beans but they are on the grocery list.

"Can I have my grappler gun back?"

Really, when you got right down to it, it was inevitable that I would find myself looking up at a morose Sparklepire with a flyaway bouffant and lean look about him.

Have you eaten anything since... since February? 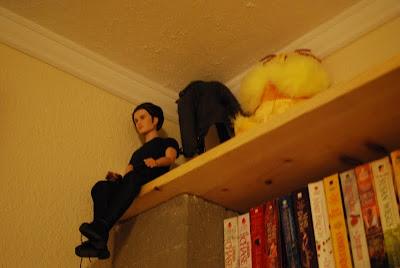 Are you lying to me?

Well alrighty then. I don't suppose you would consider helping us catch-

No you don't mind or no you won't do it?

He's been like this all year y'all. It's upsetting and makes me want to punch him but the Lorax has taken a keen interest in him for reasons known only to himself and gets riled when I push. And you don't want to see the Lorax riled.

'Sup. How do you feel about helping us catch the loose vampony?

I'm not sure the Torah has a contingency for sparklepony.

"True. Heya! What's up green dude? Why the long face?"

"Hi Lorry." Larry paused to straighten his tail out as best he could, choking back dinosaur sized tears. "Moonshine pushed me off the shelf, then dropped a book on me."

Y'all, I have never seen a such a sad sight as this green and orange dino moping his way across the carpet. Apparently neither had Edward.

"She pushed me off and then she laughed at me and while I was trying to get up she dropped a book on me a really big book and it hurt a lot and my tail is bent and my orange bits are broken and I'm not sure but I think she mussed my hair up too and it hurts and I just wanna-" His entire soft, fluffy body shook from the force of his sobs.

I was shocked with how quickly Edward left the bookshelf. He placed a soothing hand upon Larry's head. I couldn't here what passed between them but Larry was still sniffling but seemed infinitely more cheerful. 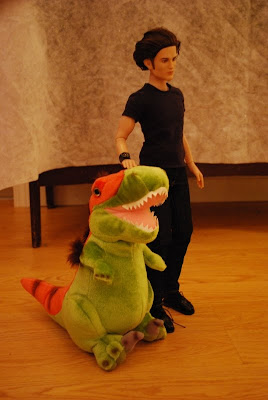 He walked off, leaving me with Larry.

Where is he going?"

"Don't snap at the sauropod dude. That is so not cool."

How does that even happen?

He shrugged, leaned further back on his shelf and went to sleep.

After giving Larry the cuddle he so desperately wanted I carried him into the living room and set him down near where my scientists were studying. He immediately made a nuisance of himself. 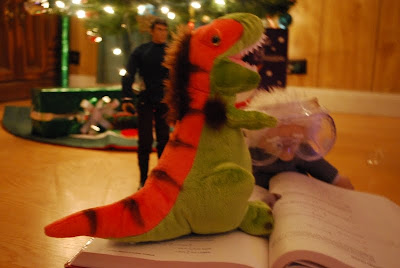 "I vas reading dis book. But you, green sir, are ztanding upon it."

"Where is the accent even supposed to be from?"

"Ooh look! It says here that sparklepires are part of some 19th century craft project gone wrong. That explains so much..."

"If you vill not zees this interference I shall be vorzed to reckon vith you."

Someone needed to stop this, luckily it need not be me. Because Edward, in typical Edward fashion, had returned scarcely ten minutes after his departure. One-upping everyone and making the month-long campaign to capture Moonshine look like exactly what it was - a waste of time. 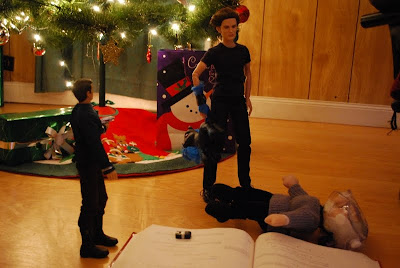 His arrival was so abrupt that McCoy dropped his tricorder and went for his phaser. Larry, bless him, hid behind me.

Edward looked at me, "I trust you can contain her?"

Larry peeked around my calf. "Good grief Mr Eddy, that sure was fast."

"I've asked you not to call me that Larry."

"How did you find her so fast?" McCoy was bent down, attempting to revive Einstein who had fainted dead away when Edward arrived with his prisoner.

"She's been hiding in Heroine's Elvis purse for the last three months. It wasn't hard."

"You have an Elvis purse?"

I think that is beside the point right now, we can discuss it later. But for the record, Elvis is awesome. I would like to discuss why, when Edward knew exactly where she's been hiding, he allowed Moonshine to run amok all this time and injure people with legos and tiny vampony fangs?

He shrugged, "I put her in this situation, it didn't feel right to chastise her for what I made her. But dropping books on defenseless dinosaurs is just not right."

"This eez exzellent! With zee pony zavely contained I may perform my tests on zher."

"Zher? You are just making it up as you go aren't you?"

McCoy and Einstein heatedly discussed what to do with their captive, and whether or not Einstein's accent was legit, while Larry cautiously watched Moonshine - still hiding behind me. I could hear Rorschach laughing from the bookshelf across the room and breathed a sigh of relief. Him I could handle, at least the reign of sparkly terror was at an end.

But as I looked into those soulless red eyes of hers, I couldn't help but wonder if all we had done was disturb this vampony and fill her with a terrible resolve. 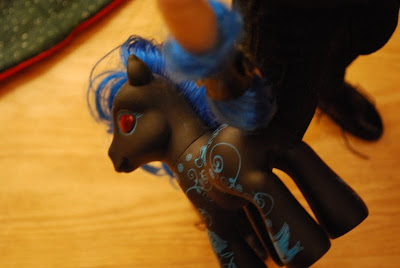