Let me start by saying this: I am not a Terminator fan. I’ve seen the first three movies, and was a sufficient age for the third one to see it in theatres and be moderately entertained. I know Skynet and John Connor when I hear them and can place them appropriately in the fandom. That’s as much my general SciFi geekness as anything though.

Terminator Salvation was a movie. I have a hard time of saying whether it was ‘good’ or ‘bad’. Things happened, stuff blew up, people were terminated – it was a movie. It had no redeeming social value whatsoever, but I did enjoy it for the most part. Way more than I did Angels and Demons *ptew* which I was actually looking forward to and can’t say without spitting now, it was that bad.

Terminator Salavation was simply kind of there. I do think that had I not gone to the showing I would have liked it significantly less. The 80% male crowd I was with was rowdy and loving it. They kind of made the movie for me. 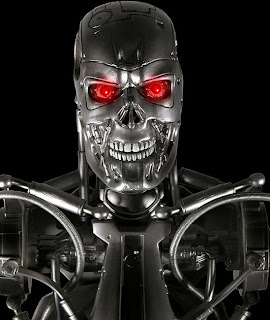 To start, was anyone surprised that Marcus ended up being a Terminator? They showed it in the trailers for Cthuhlu’s sake! It was so obviously spoiled for everyone that I’m not even going to hide it behind white text. I am more than willing to suspend disbelief - I’m very good at it, it’s what makes SciFi and Fantasy so much fun for me. I would have been honestly surprised when the big reveal came, complete with a soundtrack that said ‘Hey look, he’s not what you thought!’. It would have been cool. Instead, the audience yawned and impatiently tapped their toes while waiting for the movie to progress. Bugger you sideways trailer/preview people, it would have been the only awesome thing in the movie.

Note: I was totally spoiled for a facet of Helena Bonham Carter’s character, which in the end never turned up. In fact, I’m curious as to how much of her story was cut. It seemed like there was a whole other thing going on that we only saw hints of. Moving on…

The movie itself was super cool in the effects department and I like how the post-apocalyptic world under Skynet turned out. Although, my toaster could have found the remaining human encampments, they were that well hidden. Also, did anyone else think it was weird that Connor was practically pimping his mother out from the future?

The main thing, and the only reason I would see the movie again, was this: Arnold Schwarzeneggar. The CGI cameo of Ahnold was rockin’ awesome. The whole theatre cheered. Seeing the connection from this origin movie to the original Terminator was a nice touch that actually redeemed the movie a great deal.

All in all, if someone had it on I’d watch it, but I wouldn’t spend money on it. Even for you Christian Bale.

I don’t know what to say about the newest Trek movie that hasn’t already been said a hundred times over. It was, in my opinion, a fantastic movie and mediocre Trek. I think this picture of Wil Wheaton leaving the movie sums it up nicely (WW is the freakshow on the right). 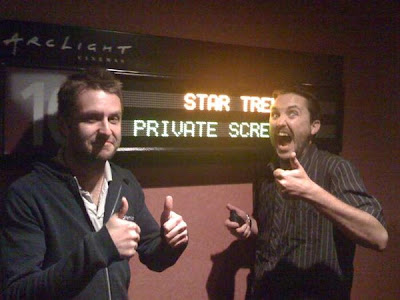 A fantastic movie because whoa and damn, I cried in the first ten minutes from the drama and in the last ten because I knew it was about to end. My father and I had to resist the urge to turn around and see it again right then. I saw it three times the first week and was entertained every time. It was a blend of action, character and plot that worked for me.

Bad Trek because there was no deep philosophical thought. No ethical dilemma. Bad things are happening and we must stop them. Any qualms about changing the timeline were lampshaded by Spock’ and never heard from again. That’s not what Trek is really about, and slapping a stylised arrowhead on a ship and calling it the does not the make. Yet the potential is there, and I give them props for succeeding in blending movie and Trek as best they could while juggling making an origin movie as well.

I would like to add here that at no point has a Trek movie had to, or even attempted to, introduce the Trek characters to us. Both I-VI and VII-X assumed you already knew the cast from their respective shows. This movie introduced the characters as though we’d never met them before. And maybe it didn’t flesh some characters out as much as some people might want, but there are seven main crew members from the Original Series – someone is going to suffer lack of development. I just wish we’d had more backstory for McCoy.

For one, he’s an integral part of the Kirk dynamic; where Spock is Kirk’s logical side and McCoy his intuitive. For seconds, Karl Urban is yum, I always had a thing for McCoy (right after my thing for Riker) and I would have totally gotten behind Eomer cruising the bridge while growling about green-blooded hobgoblins for two hours. But that’s just me.

Did it fail a bit on the plot level? Yeah. There were plot holes big enough to drive Nero’s ship through but you know what? At no point during the movie did I give a rat’s ass. Yes, after a monologue from Nero about his problems we then got to hear virtually the exact same monologue from Spock’. That was the only part in subsequent viewings that I could have done without, although I was still reeling from Spock’ shock the first time around to care much. If we could have gotten the backstory from the comic, I think Nero would have made a bit more sense as a villain. But again, seven characters we care about and five got shafted on character development. If someone had to suffer lack of character, I’ll fiddle while Nero burns.

[An Aside with minor non-Movie Spoilers: Speaking of the comic, how awesome is it that Data is now Captain Data? About freaking time. He’s been in Starfleet for... let’s see, he graduated Starfleet in 2345 and the comic takes place in 2387. So 42 years, but we don’t know how long he’d been Captain for when the incident happened. He was to become First Officer of the Enterprise-E in 2379, but even with a definite date, it still took 34 years to gain such a post. I’m willing to believe that Data encountered some prejudice when it came to promotions given his non-living status, but forty years is a whole career for lesser mortals. Although, Riker stayed a Commander for fifteen years because he loved the so much. So maybe that’s it. The is killer on promotions unless you’re the new Kirk. (Aside within an aside: I know Data was lost during Nemesis, but the events of the comic suggests that B-4 was successfully imprinted with Data’s memories and is a new Data. Shut up, I have too much time on my hands.)]

My one complaint with the movie, and it got more and more upsetting to me with every viewing, is this: Uhura. Don’t get me wrong, as an ancillary character she kind of rocked (even if she was upsettingly skinny) and I have no problem with how she got on the bridge or with her relationship with Spock. As someone pointed out, she definitely dispersed some of the HoYay of the Kirk/Spock relationship. However a woman who leaves her post in an emergency to comfort a lover and make out? It was way out of character for both Uhura and Uhura’. As an officer, she should and would have waited for a more appropriate time to talk to her friend. That bugged me.

I love Trek because it is about hope. It shows that no matter the wars and troubles of today, if we can get past the problems we face we can reach out into a bright future where the stars are no longer the limit. It is a vision of our future that stands next to Mad Max and Blade Runner and thumb its nose while muttering “pessimists”.

I saw it five times. I finally got my Trek tattoo I’ve wanted since I fell in love with Will Riker when I was five. After years of reruns and DVDs, it made me dig out my original flavour model from behind some family photos and hang my Enterprise-D from my review mirror. It reached inside me and shifted my Trekkie switch off of neutral and back into drive.

But really it all boils down to this:

Thank you, JJ Abrams, for making it okay to love Star Trek again.

So how to explain this? 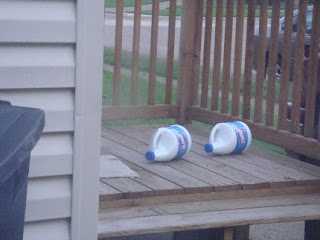 It somewhat defies description does it not? These would be two bleach bottles I found on my grandpa's porch one morning. Perfectly aligned, to what I do not know.

Either the world is strange or my grandpa is. Possibly both.