Whenever I am trying to make a decision - usually relatively benign such as 'Should I wear this hat today? - I always ask myself the follow-up question, 'What's the worst that could happen?'

You might think that in this case it would be something like appearing on fugly.com. But no.

No matter what the decision is, my brain immediately turns to some variation on this... 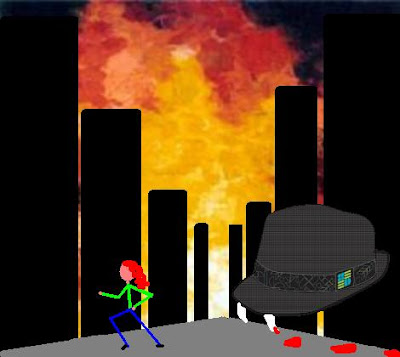 People fleeing in the background, optional.

And that, kids, is why I almost never try anything new.

Labels: ?, god damn it, i crack me up, imaginarium 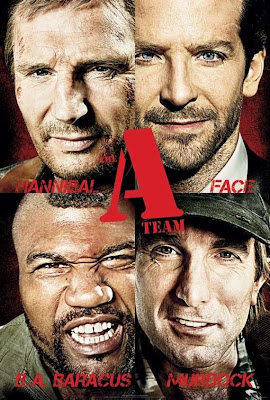 Oh my god y'all, how did I miss this when it came out? If my not seeing it in the theaters directly contributes to their not making a sequel I am going to be so mad, you don't even know. I will sign an affidavit that I will go see the sequel.

I love this movie.

I watched A-Team for the first time on Tuesday night while I was making my dinosaur coat (I will blog about my dinosaur coat later, promise). Since Tuesday, I have watched this movie at least three times every day - more on some. And I am no where close to being sick of it. I laugh at the jokes and cheer the action every time. You could not have made a movie better designed to fit my interests.

Do I even need to recap? Or can I make the assumption that if you are reading my blog of all things you have a fair idea of who and what the A-Team are. I have never in my life seen an episode (or at least hadn't before Friday night - yay Netflix), and even I could have given you a basic rundown on the show.

Put four crazy personalities into high-pressure situations, mix in self-deprecating humor and a generous amount of awesome. Sit back and watch it explode.

Quentin Jackson does an amazing Baracus - managing to fill Mr T's shoes without ever feeling like he's making fun or doing an impression. [Similarly, think Zachary Quinto in the new Star Trek.] He had a pretty silly B-plot, but I didn't pay it much heed and you might as well not either.

Bradley Cooper is pretty as always, and although he's not my favorite actor in the world, he plays Face perfectly. That role might as well have been written for the guy. Even at his most smarmy, you still want to take him out for a drink. His entire demeanor when saying "I'm worried!" in the hospital about fifteen minutes in sells the line in a way I can't really imagine anyone doing.

You know who may be my favorite actor in the world? Sharlto Copley. He was amazing in District 9, and as far as I can tell this is only his second major film, and he nails it. He has now gone on the very short list of actors whose films I will see regardless of what the film is about. I think that list is only about three names long at the moment. Watching him play Murdoch was a pleasure - I would shill out the $15 I paid to see Sucker Punch (which I enjoyed, but no where near as much) just to watch two hours of Copley playing Murdoch.

Lastly, and bestly, is Liam Neeson - the silver-haired fox. Rrowr. He straddles between father-figure and brother-at-arms so deftly that you'd think he was Hannibal. Now, I'll be the first to admit that watching him play what is in essence a comedic role is a significant percentage of what makes the movie so awesome for me. I'm finding myself disappointed he hasn't done more comedy roles - he does serious so well that it's both surprising and awesome to see how well he plays Hannibal's grinning, cigar-chomping mastermind. Also, he's gorgeous. I have a crush, okay? What woman doesn't?

There are some hilarious moments, one with the CIA operatives in a van about two-thirds of the way in that has me in stitches every time. "Hey, final request - don't let this guy shoot me please." Also, any scene with Murdoch, Copley plays him so hilariously insane you can't help but smile every time he appears on screen just in preparation for what he might do.

I'm not going to pretend this is a masterpiece of cinematography - there are parts of the movie and the plans that I am still catching, even on this - my twentieth or so - viewing. But do I care? No. And neither should you. As Hannibal says, "Overkill is underrated." The movie is outrageous, and enjoyable precisely because it is so outrageous. This movie is solid action movie fun.

For the past ten years Negotiator has been my favorite film. Although I only ever watch from about thirty minutes in to thirty minutes out - the bits actually in the building to be frank. But I love every minute of A-Team and it is so totally my new favorite. I'm so pissed I didn't go see it in the theaters. I don't think it was marketed well to the 18-34 year old female demographic, frankly.

If you haven't seen it, get it. If you did and didn't like it, give it another chance. Serious. It deserves it. I pity the fool who doesn't see this movie.