I have a teensy, weensy problem...

I have nothing to grace the top of my tree.

In years past, I've put a gold and red star but I hung it in my office this year. I was never thrilled with it anyway, although it's gorgeous. When a tree includes a T-Rex, penguins and Commander Data it seems a bit of a cop-out to put a star at the top.

So this year I'm thinking about putting something special, something awesome. One of these guys... 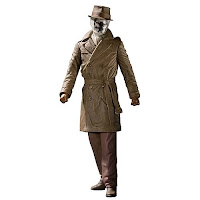 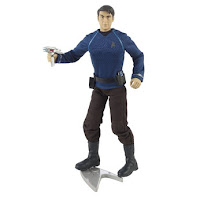 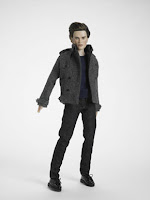 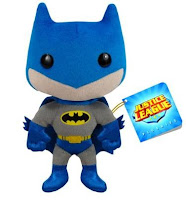 For the record, that's a Rorschach {Watchmen}, Doctor McCoy {Star Trek}, Edward {Twilight} {Don't judge me}, and a plushie Batman {really?}. There are Pros and Cons for each:

Rorschach Pros: It would tie him up, keeping him from causing mischief, and generally (hopefully) keep him from setting the tree on fire like he's been threatening.
Rorschach Cons: I wouldn't put it past him to set the tree on fire even/especially when tied to it. Also, I'll have to listen to him bitch every time I go near it.

McCoy Pros: As a Star Trek fan it seems only logical, he's also by far the prettiest of the three, his blue uniform will go well with the color of my other ornaments.
McCoy Cons: He's kind of (excuse me for saying it) boring. He'd also be about three inches from my rather large Data ornament and for whatever reason they don't like each other much.

Edward Pros: Creepy Edward would be stuck to the tree, and not watching me while I sleep. It would amuse McCoy and Rorschach to no end. He's the best candidate for 'angel'.
Edward Cons: Anyone who came over would know my shame in owning him, and may not get the funny - instead thinking I'm a crazy twihard.

Batman Pros: He's adorable, he's also blue, he would enjoy a chance to be the 'Guardian of the Tree.'
Batman Cons: He's kind of small and I've had my eye on a Batman ornament and I'm not sure I'd want both on the tree. Seems like overkill. Also, he's kind of small.

So there's a poll in the sidebar... help me out here. Who do you think is the best/funniest/most awesome tree topper I could use?

I wish I had a Starbuck, she'd be the perfect 'angel' for my tree. If I find one, this poll will become absolutely moot.

I am, in the family in my vicinity, the person who cooks for Thanksgiving. I usually try to avoid having to do the turkey because frankly, if I'm making everything else someone else can bake a damn turkey... 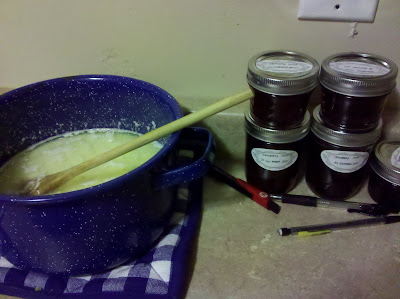 Anyway, this Thanksgiving I am making stuffing, mashed potatoes, brussell sprouts, rolls, cranberry sauce and pecan pie. All from scratch. Well, I am not a god, someone made the brussell sprouts, but still. My kitchen is a mess, my house is 107 degrees and I want sleep. Like, now. But I wouldn't trade it for the world.

I love Thanksgiving, it is probably my favorite holiday after Christmas. I love cooking for people, I love being around friends and family, and I just love this attitude of being thankful for things.

But from the deepest parts of my heart, I am thankful for you guys both here and on twitter. You've gotten me through some rough times whether you know it or not.

Thank you.
Posted by The Heroine at 19:12 No comments:

You know what I hate? People who tell you not to laugh at your own jokes.

Screw them. Bunch of whiny little bastards. If you're not laughing, why should anyone else?

Let me tell you something, and it's not a big secret, I think I am hysterical. I crack me up.

I talk to myself when I'm driving, quite a lot actually. Usually because the radio is off and as long as I'm talking to myself it keeps me from yelling at other drivers. Which I am also prone to do. I'm pretty sure I have some sort of automotive Tourette's.

Anyway, occasionally I'll be tooling along, conversing with myself, and say something so funny I have to pull over. I might even call someone and tell them the train of thoughts that led me to this amazing feat of comedic endeavor. Which, honestly, most people take about as well as cat stories,* that is to say with feigned interest while they do other things and mouth bad comments about you to whoever they're standing with.

I'll be sitting at home messing about on the internet and make a comment to myself that breaks me out in giggles.

No one will ever appreciate your sense of humor the same way you do, so why not take advantage of that?

It's okay to laugh at your own jokes, really.

*Dear people who own cats: no one but you and other cat owners really cares what your cats are up to. I've owned cats, I've told my fair share of "amusing" cat stories. But serious, no one cares.
Posted by The Heroine at 16:44 No comments:

Labels: don't be an idiot, god damn it, i crack me up

The Military and Me

I have several jobs, one of which is currently doing work with the US Air Force to create... I'm not sure what exactly and frankly I'm not sure they know either. About a month ago we went to their base nearby and had a series of meetings there.

While I was there, I disovered some alarming things which I shared on twitter.

The Colonel we are working with is named "Colonel Tye." If that sounds familiar it's because he was one of the final five Cylons on Battlestar Galactica (two year old spoilers white out - you're welcome).

That's not the best part. The BEST PART is that his call sign, hand to god, is 'Toaster'.

It gets weirder. The US Government uses a program called SkiWeb (pronounced 'sky-web'). I'll let that sink in for a moment. If you get why this weirds me out skip to the next paragraph, if not I'll explain: Web is a synonym for 'net'. Skynet is the program created by Cyberdene technologies which loosed a horde of bloodthirsty Austrian cyborgs on us in the Terminator universe. Yeah...

So what gift did we give the illustrious Colonel Tye, also known as 'Toaster', after we spent a week discussing, among other things, a program called 'SkiWeb'?

I'll give you a hint, it was a model printed from our 3D printer.

Our 3D printer, by the way, is self-replecating, all of the parts for a new one can be printed on the printer itself (well, except for a few size restrictions our particular model has).

My boss and I have already had a discussion about this. I bear no responsibility for the upcoming robot apocalypse, he'll keep my name out of the records. In return, I'm required to inform him immediately if a woman in black fatigues comes looking for him.