How Victoria Dahl is making me lose my hair


I would like to tell you a story about how one of my favorite authors and twitter compatriots caused me to lose about 10 inches of hair.

On Monday evening I was browsing through the twittervese, as one does, and came across this post by the great Victoria Dahl:

Which Piqued my curiosity. It leads here and eventually got me to this image... 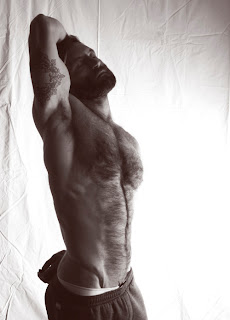 This of course prompted several more minutes (hours) of casually browsing through Ms Dahl's tumblr searching for more interesting things (more pictures of hot mostly naked scruffy men). While I was wandering through this tumblr, I came across this post: http://victoriadahl.tumblr.com/post/30362185369/for-those-of-you-wholl-be-reading-close-enough-to which had this picture as it's centerpiece... 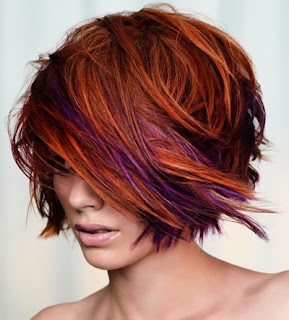 Now I dye my hair approximately that color of red to start with (a bit darker maybe), and have been looking into getting non-natural highlights for a while and thought to myself, maybe I should do something in that color scheme?

And then I shrugged and went to bed because that's what you do when you see shit on tumblr at 11:30 on a Monday night.

The next day I was out to lunch and thought, "I should cut my hair. I should get that exact haircut." I called a salon and within a fifteen minutes I was looking at this: 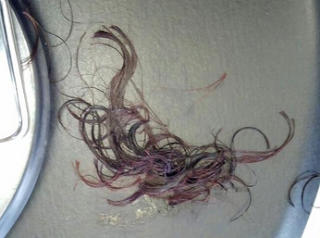 This was only the first cut and within a few minutes more I had lost around 10 inches in overall length. My stylist used an electric razor at the back of my neck and my hair in a ponytail used to fall well below my shoulders. That's how short we're talking.

And when it was all said and done I walked out of the salon feeling deeply confused by what happened. Am I really so susceptible to suggestion that someone whom I like and admire posting on tumblr will cause me to make a massive overhaul to my personal appearance?

Am I really such a pushover that if someone shows me something pretty I have to go out right this moment and get it without thinking about it for more than thirty minutes?

Am I really that person?

Yes. Yes I am. Apparently.

But guys, I have to tell you. I look fabulous. 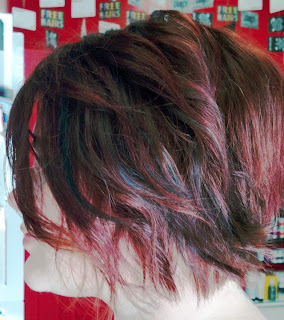 ** This has more volume than I've been styling it with (the stylist and I were messing around) and I went with teal instead of purple as the highlight color.