Actual conversation after the ending of Abraham Lincoln: Vampire Hunter

John: Actually, when Lincoln gave the Gettysburg address no one cheered, everyone thought it was shit.

Me: That's what you're choosing to nitpick over?
Posted by The Heroine at 17:02 No comments:

Twice in the past week I have had to get into a discussion with a salesperson because of a clearly marked discount that they did not understand. And I mean this in the most generous sense possible: these were manufacturer's discounts the store was running on their behalf, not just some salesperson being dumb or oblivious. It was just obvious the store hadn't thought things through.

Both incident happened in the same store.

[Note: I'm about to enter and intensive 10-week course which will have me working 16 hour days so I'm stocking up on candies and cookies so I don't kill someone around week six. These will be kept in the car in case of me or other people emergency. Anyway...] 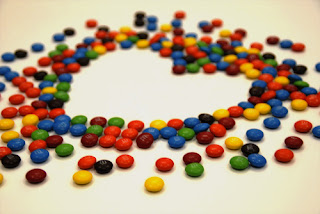 In the first case, there was a discount on M&Ms, $1.00 for any pack (sizes 1.6something or larger). I bought two packs of peanut butter M&Ms - sharing size which is like 3.something something. Larger to get to the point. Of course - they did not ring up with the discount and the clerk kept explaining to me over and over it only referred to the regular size bags, like in the picture. I told her I understood this, but the sign also clearly says or larger. We both agreed my sharing size bags were larger. Eventually she just gave up and sold me at that price. Winner = Me.

Now, tonight, I go in and see a deal which is 3 single serving Nabisco packs for $2. On the shelf were some Oreos, Chips Ahoy, something else, and Oreo Cakesters. All Nabisco, all single serving. I bring up three of the Cakesters because all the nom are mine thank you. Now the cakester packs, if you haven't seen them, are obviously a little larger than the others. But still single serving. Again, they ring up at something like $1.84 each and obviously not discounted. I start again, although this time I'm not as pushy because the sign says regular price is $.89 and these were clearly not that. But I did point out to the guy that he needs to move the cakesters in that case, since they're on the shelf with the things that are on sale and they have no price on them to let people know they're not. Winner = them :(

I know it's sometimes asking a lot of people, but please actually consider what you are actually offering before you commit to it. My examples are small scale, but they range all the way up to the guy who ended up winning an F-16 from Pepsi (who of course reneged).
Posted by The Heroine at 21:59 No comments:

Snow White and The Huntsman

If this movie was a fourth-grader, I would rate it as 'Exceeds Expectations'. I did not have high hopes for this movie, even considering I thought it looked beautiful and have been waiting for it for some time. 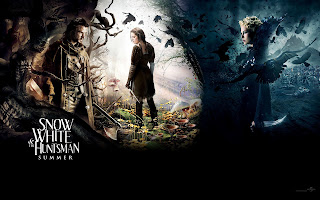 The plot is pretty much basic Snow White. Evil queen takes over kingdom, banishing young princess in some way. Princess escapes into forest, pursued by huntsman. Dwarves are met and help Snow White defeat the evil queen. The land rejoices.

But this movie grows up in many ways from the more traditional tellings - and is much truer to the original feel of the fairy tale (much darker).

I have to say, I like badass retellings of famous fairy tales. I like seeing the damsel in distress pick herself up and kick some ass. It's nice and really validates to me how much I loved these stories as a kid, and how much I still do. Seeing Snow White pick up her sword and charge the castle at the head of her own army is a big cheering moment.

The dwarves are one of the high points of the film - although after seeing Peter Dinklage do his thing in Game of Thrones, I'm wondering why they used full sized humans and visual effects instead of casting actual dwarves. (Is that correct? What's the PC term?) But they are awesome, a little bit of comic relief without undermining their own pain at the land dying around them.

(Note: There were occasions when I had no idea whatsoever what the dwarves and occasionally the Huntsman were saying. A combination of their accents and their deep, gruff, gravelly, 'I've seen things you can't even imagine' voices. It meant I missed things I'm super curious about.)

I've seen lots of people, and reviewers, taking exception on if this Snow White is objectively fairier than the Queen (that Kristen Stewart is more beautiful than Charlize Theron). They seem to take it as a plot device that you just have to buy into in order for the movie to move forward. But I disagree. Not that Kirsten is better looking than Charlize - that's a matter of preference and I think both are gorgeous. But on which is fairer. In that case, it's no contest between them. For all her beauty and poise, the Queen is not fair, she's not beautiful on the inside. Whereas Snow White is beautiful inside and out. She has compassion and joy in life where the Queen is bitter and angry. The word choice here is important, Who is the fairest of them all? The queen nominally qualifies, she is gorgeous - but Snow White is the whole package.

Another part of the movie that seems strange is the love interest angle. The movie definitely moves towards the idea that Snow White and the Huntsman belong together - the other love interest (the more appropriate one) gets short shrifted throughout the movie. It's a little confusing when you're watching because what seems like the designated love interest is extraneous to the move. Spoilers: In fact, it's the Huntsman who's kiss wakes Snow White from the apple bite. Looking at casting news, it looks like the originally had much older men in mind for the role: Viggo Mortenson, Hugh Jackman. And except for that one moment, the movie plays the Huntsman as being much older and more of a father/mentor than a love interest. But how could you waste Chris Hemsworth like that? The result is a weird dynamic between the three, and a scene that seems slotted in. Also, no clean ending to any of the romance.

Which is nice, because this movie, this story, isn't about Snow White finding the love of her life - or finding some to save her from the evils of the world. It's about her confronting her own fears and finding her own way. Becoming her own woman. I love to watch people fall in love - but on looking back I'm actually glad the movie ends on her becoming queen - not getting married or a kiss, but her standing in her crown in the moment she has earned.

So as usual I've glossed over the plot, which is fine, it's what I do. But I'll finish this fairly short review with I enjoyed the movie. Would like to see it again (not for $11 - but sometime) and will probably get the DVD.
Posted by The Heroine at 13:30 No comments: