I'm a backseat revolutionary. I see that there are problems in the world but I either a) have faith that the people in government actually care and are trying to fix things, or b) feel like it can't be fixed. Either way, I generally don't get involved. There are very few issues I'm passionate about and they almost never come up in the news as they are a little (lot) fringe.

On Tuesday night, I was sitting in my new apartment reading textsfromlastnight and watching X-Factor. A fairly solid American night in. I toggled over to twitter and suddenly my tweetstream was on fire. I began to see pictures of people showing injuries from rubber bullets. Video of groups trying to outrun clouds of tear gas being set by the police. I started checking tweets from people who were there and the outcry was unanimous. A group of people marching in protest had been violently responded to by the Oakland PD. And the best defense Oakland could come up with was that protesters had thrown "paint and other hazardous chemicals"* at the police. Also, hearsay about one M-80 being thrown at a police officer.

I was stunned by this, and I sat in shock on my couch as I started frantically switching between news outlets both on my TV and online trying to find someone who was covering what was going on. At the time, only ABC was saying anything, and that wasn't much.

It didn't take long for me to move from stunned into angry. I very rarely get truly mad about something, although I get frustrated fairly easily, and when I do it generally has to do with injustice. Here was a group of people trying to make things better for everyone, being violently opposed by their own government.

Now, I'm not sure I support Occupy Wall Street. I understand and agree with what they are trying to do, but I'm not sure their methods are exactly the best. But on Tuesday night it didn't matter. These were US citizens being treated like a criminals.

I wrote the number of the one person I thought might bail me out of jail on my arm and I jumped in my car.

I'm not sure what I thought I would accomplish. One more person wasn't going to make a difference. But I couldn't think of any other way to let Oakland PD and indeed all of America know that this wasn't right. This isn't what America is supposed to look like. Not ever.

I'm pretty sure I parked illegally - every cop for forty miles had their hands full two blocks north of me, who was going to give me a ticket? And I started jogging towards 14th street.

Bang doesn't even begin to cover the sound it made when it went off. It was loud enough to make me stop dead, jarring enough to stop my heart. The noise was less than two blocks away and I had no idea whether it was a gunshot, an explosion, or some even scarier third category.

That's when I saw the people running. And right behind them, like a monster from a Stephen King novel, a cloud of smoke. 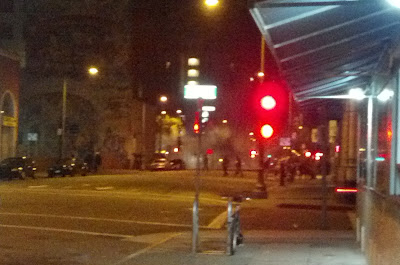 It felt far away. Like another planet. Very unreal. Honestly, the sound of the canister going off frightened me more than the idea of the gas itself.

Until a change in breeze pushed the edges of the cloud my direction.

I didn't get a full face of tear gas. I can't imagine how painful that would be. The brief exposure I had made it almost impossible to breath and left me retching into the side of a building.

People, I guess with the same idea I'd had originally, were running past me to those who had caught the full brunt of the gas - pulling people out of the way, washing their eyes out with water and lending a shoulder for those who were having difficulty moving on their own.

This was the 'mob', this was the 'riot' that police from all over the East Bay had been called out to respond to. 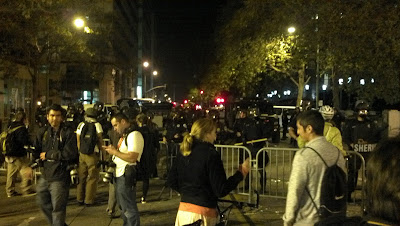 Oh yes, this is an unruly group of people, what with their cameras and mobile phones. The only time a camera becomes dangerous is if you throw it someone's head. And by the looks of them they cost more than I make in a month so I sincerely doubt that was going on.

Now, I admit this was not all, or even a majority of the people down at Occupy Oakland. The people who had started it were behind the barricades, still fighting in many ways for their lives. There is no such thing as 'non-lethal', only 'less-lethal'. Can you imagine the fear? You're facing a much larger force which has already proven how far they were willing to take things on virtually no provocation. What could that possibly feel like to the people trapped behind the barricades in downtown Oakland?

But the police were not containing their aggression to the 'official' Occupy Oakland protests. They weren't containing it behind the barricades, but openly firing into public spaces. They were firing upon journalists and photographers. Hipster onlookers and curious college students. They were firing on the people trying to help the people who were fired on before. This wasn't crowd dispersal, it was a police-led riot.

I didn't stick around to get arrested. I was disgusted with the police, with Oakland, and a little bit with myself as it became increasingly clear that there was nothing I could do to help this situation. I was just another body downtown making the police nervous.

So I went home.

I had to pull over twice because my eyes were stinging so bad I still couldn't see. I've had breathing troubles since then.

This isn't America. In no world should this be how people who are legally and peaceably protesting their government are treated.

I haven't been a big supporter of the Occupy movement, their's just wasn't a cause I felt I could get behind. But a government assaulting its citizens? I'm not just mad, I'm not just riled up, I'm fucking furious. 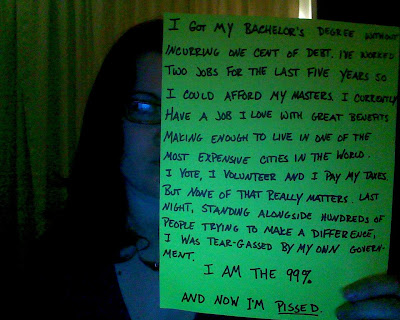 *If the top of your list of hazardous chemicals is 'paint', you're over-reacting. That's just a fact.

Labels: god damn it, never talk about politics or religion

In memory of Suzanne

I was eleven years old when I met Suzanne. She was my sixth grade teacher, and I'm ashamed to say that my class was the reason she refused to ever teach sixth grade again.

We gave her so much grief, and she took it with the grace beyond the realm of mere mortals. No matter how bad things got, how bad her life went, she faced it with a relentless optimism she wore like a suit of armor – ready to wield a joke and flash that beautiful smile.

I never would have guessed then that that rocky start would be the start of a friendship that has lasted 15 years.

Suzanne taught me so much, which is fitting all things considered.

She taught me that musical theater was more than just Cats. And that Steven Sondheim is by far superior to Andrew Lloyd Webber.

She taught me that to cut in line at Disneyland all you needed was a wheelchair and a friend willing to push you around – I'll give you three guesses on who was pushing whom.

She introduced me to the wonders of Ray Bradbury, and for the next three years took me to the LA County Book Fair to meet him – where I lugged three hundred pounds of books on her behalf.

She taught me the value of a good book isn't in how how much it entertains you, but by how much it changes your world.

She found it impossible to walk by a bookstore. They pulled her in like a giant lodestone – and she was the magnet. And once there, I don't think I ever saw her buy anything for herself. It was always “here, you'll love this” or “I should get these for my students”.

Her generosity was limitless.

Suzanne introduced me to Auntie Mame, and I cannot count the number of times she turned to me and say in her most dramatic interpretation “Dahling! Life is a banquet, and most poor suckers are starving to death!”

She lived life in a way that made every moment seem precious. A Thursday wasn't two days before the weekend, it was a chance to see a 1950s movie at an LA cinema or go to the Orange County Performing Arts Center.

She was a role-model in the best sense of the word.

She taught me that love was finding that one person who loves you for everything that you are. Who isn't blind to your faults, and loves you not in spite of them, but because of them. I can say, without any equivocation, that one of the proudest things in my life is that I helped Suzanne reunite with Tom.

She did so much for me, I will take credit for what little I could do for her.

Suzanne also taught me how to stand up for myself, and that being a woman means finding the strength and confidence from within yourself to go on when life was hard.

And her life was hard. She was dealt more blows than any person should ever have had to deal with – but she faced them with that spirit and cheerfulness and an unwillingness to accept things just because someone told her to. Some people might call that stubbornness, I call it willpower . She fought for every inch and earned everything she had.

But Suzanne's real gift was that she really and truly believed that you could do anything, and more so than that, she would talk to you, listen to you - and in the end, you believed it to.

Her ability to inspire and motivate was astounding and unwavering – she would believe in you long after you had given up on yourself. She was always available for that three AM phone call because you felt your life was falling down around your ears.

And she could pick you up and put the pieces back together without ever breaking stride.

Suzanne gave every person she met their own set of wings, stamped with her bright smile as the seal of approval, and she never asked for anything in return, she'd just stand back and let you fly...

I just wish we didn't have to do it without her.

To explore in peace

In 1969 two men landed on the moon without full certainty that they would be able to take-off again. William Safire drafted the following in case Michael Collins was forced to abandon his two compatriots on the moon:

These two men are laying down their lives in mankind’s most noble goal: the search for truth and understanding.