Damn you invisible animals living in my body!

I am sick. Bleh. Been trying really really hard not to be for the last couple of days, thought I was doing well today, then got up and did a baby shower for A and was one my feet and busy for about six hours.

Now I feel like shit. Eating soup, drinking Sprite and just generally feeling sorry for myself - as one is wont to do while ill. I will likely spend my Saturday night watching Buffy since I have been wanting to go back and rewatch the series, and since I have it right here...

On the plus side, the dog is super cute when I'm sick. She brought me her ball and after I explained that I wasn't really up to going outside and throwing it, she walked away all dejected like. She returned with her blue squeeky dinosaur and laid it in my lap, then laid her head on my lap. Thank you dog, that makes me feel a lot better.

On a brighter note, I got a Team Edward (James Olmos) in the mail today, from my sister-in-law who is doing everything in her power to become my most awesome relative - blood or otherwise. First it was a Star Trek necklace, then the Geek Girl's Guide to Cheerleading, then Maus... now Team Edward. I love you J. 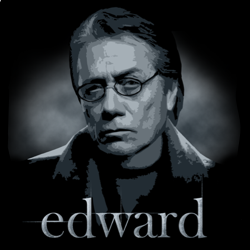 Lord, I am such a dweeb (Dweebus Maximus is the term according to Kali and Mike of Dreamworthy Gifts). Not only did I not even leave the house on Saturday night, I spent my evening... well, let's go into the backstory first shall I?

Within about a half hour of waking up on Saturday morning I was involved in a conversation about what a Batman / Battlestar Galactica crossover would be like with @hubcomics. Because, yeah, that's my life now.