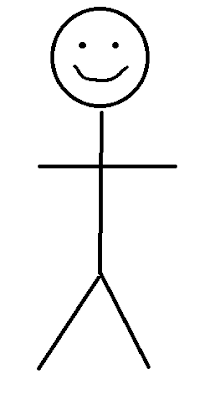 This is a picture of the Prophet Mohammad. Because I say it is. I drew it, I should know. 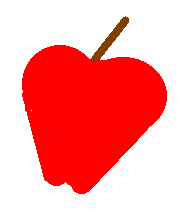 This is also a picture of the Prophet Mohammad. Does he not look delicious?

Does saying that something is something else make it so? If you deny my apple is Mohammad (even though I assure you it is the most accurate of all representations) then at what point does my stick figure qualify? 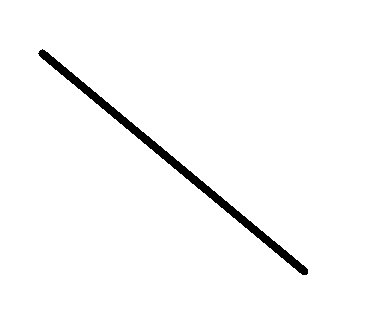 If I tell you this is Mohammad does that make it so? Would it offend a Muslim? If someone else calls it a line but I call it Mohammad, is it still an offense?

I do not respect religious belief any more than I would respect the belief in UFOs or the tooth fairy. I can respect you as a person without respecting your ideas. If the sight of a drawing (which lacking in one particular label is not offensive at all) is so offensive to you that you literally cannot abide it - that's your problem, not mine.
Posted by The Heroine at 14:55 No comments:

I use the term "awesome" quite a bit, but I rarely use it in its strictest sense.

awesome: to inspire awe and wonder

When I saw the space shuttle back in January at the Smithsonian, which apparently I didn't blog about (what's up with that?), that was awesome. I stood there and quite literally cried. Overwhelming tears of... not exactly joy. Hope maybe? The idea that mankind is journeying into space, that we are leaving the planet that gave birth to us, that is truly amazing to me.

I didn't cry when I watched Atlantis take off on it's last voyage. But my heart leapt into my throat and didn't leave for a full fifteen minutes - long after the shuttle itself was out of sight. It was awesome.

We did not end up watching from the Kennedy Space Center (no tickets) or from Space View Park. Instead, I got onto google maps and found a place that would blow the pants off any other (free) view of the launch. And it did. We were on the beach, with a clear view straight across the water at the launch pad in our own personal Corona commercial. Palm trees and a breeze off the water - it was perfect. 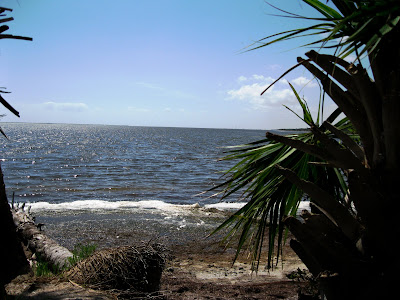 I left the image full size, if you click and embiggenate it you can see two dots on the right side of the horizon, the one on the right is the launchpad in use. We were closer than the picture seems, I swear. This is a completely non-zoomed image.

We were 10-miles away, just outside the NASA imposed limit of how close you can be. Slightly closer than Space View park in fact if you look at it on a map. The gentleman who was kind enough to help us find our way from the road asked that we not share the knowledge with the world. If you end up at a shuttle launch let me know by email (nerdheroine@gmail.com) and I'll direct you that way. Maybe. If I like you.

There are two launches left, Endeavor in September and Discovery in November. If there is any way at all, go see one of these. You will not regret it.

Decorate your own soul...

~Veronica A. Shoffstal
Posted by The Heroine at 21:09 No comments:

Alternate title: Iron Man has a built in garter belt.*

(Spoilers will be hidden behind white text. If you want to read it, highlight it. If it was revealed in the previews I don't consider it a spoiler) 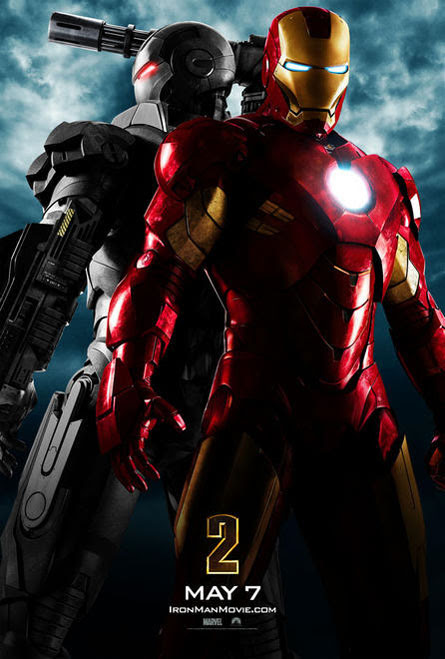 It seems to be par for the course that if someone puts on the cape and tights (or costume of their choice) in their first movie, in the second they will end up facing the Wile E. Coyote Law of Unintended Consequences. What is this law, you might ask? I shall tell you.

No matter if what you do has the desired effect, it will have three at least you never expected, and at least one of those will usually be unpleasant.

In Iron Man’s case, Tony Stark finds that after the events of Iron Man his artificial heart/power source/ battery/ whatever thingmajig is not performing as well as he might hope. Okay, it is in fact killing him. Also, the US government is not happy with a private citizen owning what basically amounts to a one-man army. As much as I am in favor of one’s personal property being exempt from government interference, I can kind of see where they’re coming from with this.

Into all of this comes Ivan Venko, the son of one of Stark Sr’s colleagues back in the day. He’s holding a grudge (rightfully so) about how the Stark’s ended up with all the money and prestige and money for what was in fact a joint project between Papas Venko and Stark. He decides to create a set of lightening whips and go after Tony Stark. You know, as you do. That is certainly my immediate answer when I am holding a lifelong blood feud against someone. Giant lightening whips. Comic book characters have the weirdest set of responses to situations of anyone, ever.

The thing is. You know Ivan Venko is a bad guy the moment he is introduced during the opening credits. He’s plotting to take down the title character, he’s grubby, he’s Russian and he’s being played by Mickey Rourke. In fact, any one of those things should clue you in to his allegiances to the forces of darkness. But when you get down to it, he had a point and I think he was in the right to seek some recompense from the Starks. Now, his methods don’t really bear up under scrutiny (see Lightening Whips) but I couldn’t help but feel for him.

I think it is a testament to the writers and to Robert Downey Jr that despite my sympathies laying with Venko, I was rooting for Stark the whole way. He’s a rich playboy who really has very few redeeming qualities... but we like him. He’s not annoying or ingratiating, we actually enjoy watching him be a total douche to people. Or at least I do. It’s been said before, but if ever there was a role the RDJ was born to play, Tony Stark is it.

Mickey Rourke.... I cannot talk about him in this movie without sharing this anecdote. It is fairly spoilery so: When Venko goes to work for Hammer and hacks his way into the Hammer Industries computer system, he puts on this little pair of reading glasses while he is typing. He’s grubby and gold toothed and looks like a cross between a homeless person and a street fighter and in that moment, typing with those glasses on, he became Sexy Physicist Man and I totally fell in lust. I really loved his portrayal of both Venko and his alter-ego Whiplash. While Whiplash’s “superpower” is based in technology, it is still a very weird character and I think it could have easily been ruined by someone going all Indiana Jones with the whips. Rourke just makes him scary. I flinched when he started slinging those things around.

There is a fair amount of other stuff going on as well. There is a rival weapons dealer and the creation of the Warhammer suit and all kinds of things but my "reviews" were never meant to be summaries, simply an outline of what I liked and disliked. I liked this movie. A lot.

Iron Man (original flavor) was a powerhouse of a movie that found the middle ground between the older comic book movies (Superman, Batman, Batman Returns) and the newer, edgier movies (Batman Begins, Dark Knight and to some extent Wolverine). It took everything that made the Spiderman and X-Men movies good and polished it until it shone. Iron Man 2 does not exceed the original, very few sequels do, but I believe it more than lived up to the promise of the first and I would gladly go see an Iron Man 3 based on this movie alone.

Note: Like the first one, Iron Man 2 has an after credits scene that is more than worth waiting for if you are a comic book fan, or a fan of the comic movies. If you’re not, it’s probably okay to skip out on it.

*Yes, yes he does. I tried to find a picture of it for y'all but just trust me, the paint job on the Iron Man suit is very *ahem* risqué shall we say?

I know, I know, it is well over-used and everyone has heard it before. But have you really? Do you know anything more than "Give me liberty or give me death?" I doubt it.

Patrick Henry's Speech to the Virginia House of Burgesses

This is no time for ceremony. The question before the House is one of awful moment to this country. For my own part, I consider it as nothing less than a question of freedom or slavery

I have but one lamp by which my feet are guided, and that is the lamp of experience. I know of no way of judging of the future but by the past. And judging by the past, I wish to know what there has been in the conduct of the British ministry for the last ten years to justify those hopes with which gentlemen have been pleased to solace themselves and the House. Is it that insidious smile with which our petition has been lately received? Trust it not, sir; it will prove a snare to your feet. Suffer not yourselves to be betrayed with a kiss. Ask yourselves how this gracious reception of our petition comports with those warlike preparations which cover our waters and darken our land. Are fleets and armies necessary to a work of love and reconciliation? Have we shown ourselves so unwilling to be reconciled that force must be called in to win back our love? Let us not deceive ourselves, sir. These are the implements of war and subjugation; the last arguments to which kings resort.

They tell us, sir, that we are weak; unable to cope with so formidable an adversary. But when shall we be stronger? Will it be the next week, or the next year? Will it be when we are totally disarmed, and when a British guard shall be stationed in every house? Shall we gather strength by irresolution and inaction? Shall we acquire the means of effectual resistance by lying supinely on our backs and hugging the delusive phantom of hope, until our enemies shall have bound us hand and foot?

Is life so dear, or peace so sweet, as to be purchased at the price of chains and slavery? Forbid it, Almighty God! I know not what course others may take; but as for me, give me liberty or give me death!