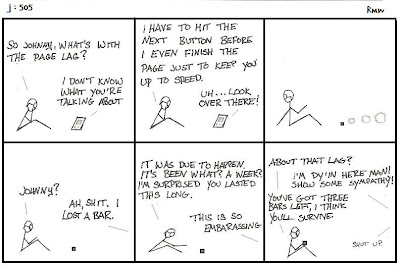 Here is how I (am forced to) read on the Sony. When I get to the last line on the page, I hit the page turn button. Around the time I’ve finished the page is about the time the page actually turns. This is especially annoying as I’m only viewing one page at a time and thus run into this problem every fifteen seconds or so.

Why is this happening? It’s not like my laptop, which does god only knows what in the background while I work. You have one function Johnny. Sometimes, the lag is so long I question whether I hit the button and hit it again, thus skipping a page when Johnny 505 finally rouses himself from his stupor. I know I have an older model ereader. I know that my computer is slow thus the lag in the Sony estore, while frustrating, is understandable.

But when you are acting on your own, you should not have processing problems! You are performing one job! If my book is boring you hum or something, don’t play solitaire in the background and eat up the processing power. Johnny 505! I am talking to you young man ereader!

On a slightly brighter note, I used Johnny nearly a week before he lost a single bar on his battery indicator. So that’s cool…

But it does not let you off the hook for the page-turn lag sir! Don’t sass me! Go to your room!

If I kill someone over this, I'm going to blame the entire collection of Smart Bitches.

Also see the origin of Johnny 505, the second comic, and some text-based Sony eReader observations.