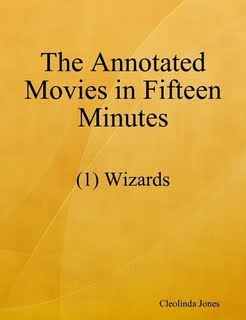 Back in, what was it, '04?, Cleolinda Jones (names have been changed to protect the innocent, that and like me she uses a nom de plume online) wrote a parody/summary of Van Helsing called "Van Helsing in Fifteen Minutes." Others followed, she got a book deal (that hoor) and went on to take the Twilight fandom by storm.

But that's just the backstory, I personally caught up with Cleolinda during the Potterdamurung. Since then, I have been a pretty rabid (hey look! froth!) follower of her blog. When the Compocalypse struck this last August and everything that Cleo had so much as glanced at quit working, she went back to work she knew was successful, spruced it up a bit, and decided to sell it on Lulu. I tell you all of this backstory because, despite the horror, it is pretty funny and if you've got a few hours to spare (serious, bring a snack) you should go read all about it.

Before you even buy the book, Cleo starts with the funny "..it's actually sort of interactive. I mean, it won't play checkers with you or anything, but it does stuff dead-tree books can't do..." and it only gets better from there. I don't want to give away any of the jokes, so I'm just going to gush a little more about how great it was without giving you any examples.

The thing is, I am a huge HP fangirl. Go read my Harry Potter and the Half Blood Prince movie review if your curious. What I love is that it is very evident that I'm not the only one of the two of us who loved the Harry Potter books. The fact that these were something that she both loved in book and movie format shines through every word and it separates it from many other parodies out there. Not liking it and making fun of it can be funny. But when people who genuinely love something understand its flaws, that has the potential for hilarity. Cleo hits it perfectly.

I'm going to go ahead and throw this out here, 'cause it seems to fit. This is the second book I've read recently that functioned as a commentary for something I really enjoyed. The first being, of course, Memories of the Future; and while Wheaton left me a little confused and disappointed, Cleo knocked it out of the park. I actually LOLed. If you've never read Harry Potter you can still read this. If you've never seen the movies it's still easy to read. Of course it helps to have done one or both, but it is not necessary. It does help a bit if you are familiar with the M15M format or you might be a little lost for a bit.

My only complaint (and it is a tiny tiny one) is that on my ereader it will not be anywhere near as much fun. This is because Johnny 505 does not have wireless so none of the links will work. This is definitely best read on a Kindle with wifi or on your document viewer of choice on your computer. I read it in my Ubuntu document viewer and it was lovely.

I can't stress enough how much you need to buy this book. At $6.25 it's a total steal and I'll probably buy another copy on principle. (Aw, Lulu won't let me. I haz a sad.)

What are you doings still reading this, go!

Note: Yes, I call proper authors by the last name (Wheaton, Moning, etc.) yet I call Ms Jones by her first. This is because it isn't her real name anyway and the Jones is tacked on because people need a last name, even fake ones. She will be Cleo until I decide otherwise. This has been your friendly neighborhood "you totally didn't care did you" announcement.