It was so worth it.

This was my first Comic Con, although not my first convention. That honor belongs to a Hercules/Xena Convention I went to when I was... 14? I'm not exactly sure although I do clearly remember cosplaying in a toga that became my go-to Halloween costume for the next ten years. Good times, man, good times.

Anyway, my first Comic Con, yes. It was exactly the amount of people I was expecting crammed into about 1/3 the space. The place was a fire hazard waiting to happen.

I went with Kali and Mike Kunkle, the good people of Dreamworthy Gifts, who I met on twitter. No, it turned out they were not in fact serial killers. My TV has been lying to me for years. They were sweet enough to bring me a present... 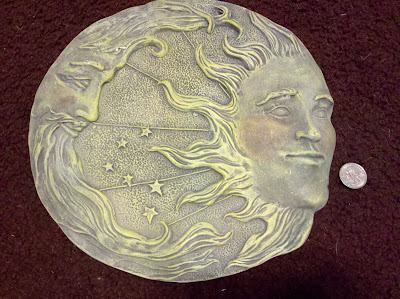 It's an outdoor plaque, the quarter is included for scale. It's really nice and was totally sweet of them. Which I may or may not have said about fifty times. And they didn't even know I'm studying astronomy! Spooky....

So the con? Man, I keep getting sidetracked. Well, after having lunch we went down to the Richardson Convention Center where I gave up on finding a parking spot and parked like a half mile away. Whatever. Little known fact about me, I don't shop for a space. I'd rather just park in the boonies and walk.

We walk in and are at one end of the artist's hall. There is barely enough room to slide your way through the crowd, and all of the artists I am interested in have hoardes of people between me and them. I'm doing an initial walk-through where I add up prices in my head so I can be sure I have enough money for the stuff I really want. Also, wishing I had some sort of drawing talent at all. Cause like whoa and damn, some of the art was spectacular.

I did get a chance to talk to Joel Watson of Hijink Ensue, one of my favorite webcomics and proud member of my Morning Coffee. He is as funny in real life as in his comic. ( Strangely, a lot of writer's are not.) Also, kind of cute. Just throwin' that out there.

I did end up picking up some pretty neat stuff, chief amongst them being a Godzilla shirt, a Wonder Woman print and 'Godspeed you fancy bastard' (which happens to be the Hijinks Ensue first collection; so, you know, go buy it). 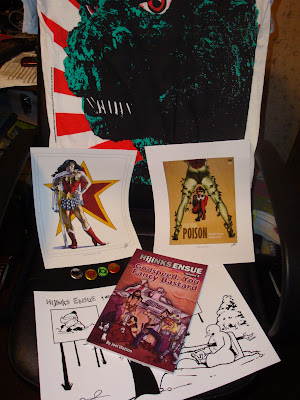 But really it was just a fun time with some really good people. I will definitely go back next year.

(Also, I went to Whole Foods in North Dallas and lamented that I don't actually live near one. That place is amazing.)
Posted by The Heroine at 19:48