The Lord of the Green Lantern

Have I ever told you my theory that the Rings of Power are in fact copies of the Green Lantern Power Ring - and that the Dark Lord Sauron was for some time a Green Lantern?

No? Oh, this story is awesome.

Also, I know that the true Lord of the Rings and Green Lantern fanboys (and girls) out there are going to vilify me for this and point out a dozen inconsistencies, but I do not care. Shuddup. 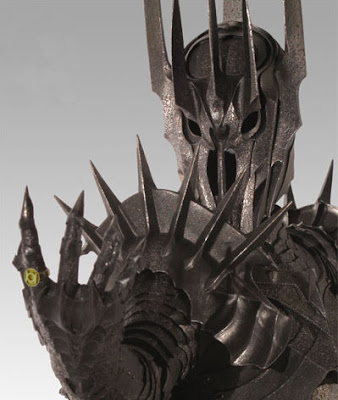 Also awesome, this picture. Look at how awesome it is. I made this (okay, I gimped this).
One ring to rule them in brightest day
One ring to bind them in blackest night
Beware my power... in the darkness where the shadows lie!

After the fall of Morgoth (I’ve already lost a few of you haven’t I?) Sauron at first tried to make good with the Valar on Eä but they wanted him to redeem himself and he wasn’t really up for that. Instead, he went into the lands of Middle-Earth to set himself up as a kind of god-king. He won over the humans and dwarfs pretty easily, but the elves still had a bee in their bonnet about the whole Island of Werewolves incident and those sisters don’t ever let nothin’ go, you follow?

Please keep in mind this is a simplified version of events and if you want the long version go read the Silmarillion and may the Lords of Valar have mercy on your soul because I sure as hell am not doing that again.

Now the annals of Middle-Earth history say that at this point Sauron disguised himself and went to the elves so that they would forge the nineteen rings of power, then forged his own in secret to have dominion over the others.

I'm not buyin' it. For all his bluster and might, Sauron was not the brightest bulb on the porch. Here’s my theory: after conquering the lands of men as a (seemingly) beneficial god, Sauron fell under the attention of the Guardians. Who were, in fact, the Valar who had chosen not to journey to Eä and instead stayed on Oa. I note here the similarity of the two names. Noted? Good.

The Guardians had, in their time, seen that the universe needed protectors and they – unwisely it turns out – offered the job of policing sector 2814 to Sauron who they knew to have been involved in the War of Wrath; even if they did not fully understand his involvement as it turns out. So they give him a Green Lantern Ring.

What an alarmingly bad idea.

Sauron goes to town, turns the men and dwarfs to his rule, but the elves possess their own strong magic and resist. This is shit up with which Sauron will not put. He spends years studying the ring, trying to figure out how he can use it to turn the elves to him. Eventually, he hits on the idea of seducing the elves to him with their own rings of power. Since they will be, in truth, mere copies of his he will ultimately have dominion over them through their own rings. The Guardians or Valar or whatever you want to call them handed Sauron control of Middle-Earth on a platter. As we know, the elves are not as dumb as their blonde hair would suggest and this goes very badly.

Sauron's ring is taken from him, but it will not bend to the will of its new owner. Sauron has invested so much of himself in his Ring of Power that he becomes little more than the energy contained in it, shining atop Barad-dûr as the embodiment of his own lantern until he can be reunited with his ring.

So yeah, to recap here: the One Ring was actually a Ring of Power, and Sauron was Earth’s first Green Lantern.


*Note: Sauron's original name was Mairon, which if you're like me you'll read as Marion. Congratulations, the Dark Lord is 115% less terrifying. Also, lantern doesn't look like a word anymore.

Labels: comic, fanficfriday, fantasy, i crack me up, lord of the rings