I got a new tattoo yesterday - and it is a product of how subsumed I am in twitter that it has taken me a whole day to get around to posting about it on my blog. So, sorry about that?

I have been holding on to this idea for a while, mainly because money has been (and still is) very tight. However, my birthday was Sunday and I got some moneys and I decided, What the Hell, let's do this.

The idea for the tattoo comes from The Lord of the Rings:

All that is gold does not glitter,
Not all those who wander are lost;
The old that is strong does not wither,
Deep roots are not reached by the frost.

From the ashes a fire shall be woken,
A light from the shadows shall spring;
Renewed shall be blade that was broken,
The crownless again shall be king

I did debate with myself on whether to get "Deep roots are not touched by the frost," but ultimately decided that other parts of the poem spoke to me more. So away I went to Skinworks - your place for fine tattooing, and the lovely people who did my first four.

The man was responsible for the process (and yes, that is me he's working on) was named Phil, and if you know him, tell him I said Hi and that it's healing better than he expected - even if it's still kind of early to tell. 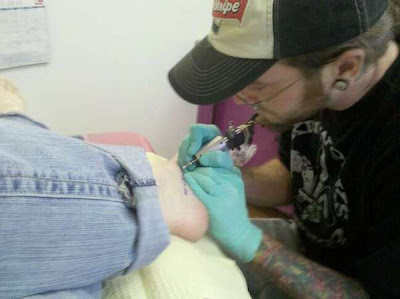 And the final result was this 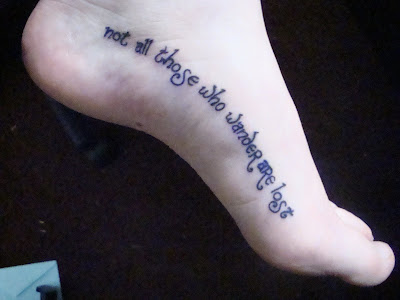 written in Bilbo Baggins' handwriting.
Please ignore how scary pale my foot is. It always looks like that.

I know for a fact I am not the only person to have this phrase tattooed on them, but I am the only person I know of to have it tattooed across their foot. Which is, coincidentally, the only place I would want to have it. It just made the most sense.

For those of you curious, the arch of the foot did not hurt that much. In fact, I'd say it was the least painful of the tats I've gotten. Anyone keeping score at home, wrist was by far the worst.
Posted by The Heroine at 16:12